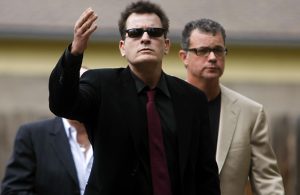 As journalists, we just don’t cover suicides. It’s a rule. But as I learned early on as a reporter, there are always tons of exceptions. Oh, the person is threatening to jump from a highway overpass? We cover that. It affects traffic. Oh, the suicide was the son of the police chief? Um, I think we cover that. Hang on, let me check.

The suicide “rule” boils down to something like this: we don’t cover suicides (unless they’re visual, interesting, or we find some other compelling argument for doing so.)

How, then, do journalism’s very loose “rules” guide coverage of Charlie Sheen, a troubled and very rich actor arguably in the middle of a slow-motion suicide attempt fueled, as Mediaite’s Tommy Christopher has argued, by wall-to-wall media coverage, from TMZ to 20/20? Not covering the story is clearly not an option, with flagship network programs like Good Morning America and TODAY fighting for fresh material from Sheen, and devoting significant airtime to telling the story. When CNN’s Piers Morgan got Sheen for a live, hour-long interview, it became Morgan’s all-time highest rated show since his launch in January.

If Sheen is not, as he believes, “fine” and “healthy,” but rather, like HLN’s Dr. Drew Pinsky believes, in “acute mania, and that’s a psychiatric emergency,” is it a story?

Author and journalism professor Jeff Jarvis watched Morgan’s interview and concluded the host was borderline enabling Sheen, reflecting on his own early days as a reporter when he was admonished for suggesting a story on a “colorful,” but clearly mentally ill local man. Was the CNN interview any different? “If we ruled out people who are mentally unstable or somewhat psychologically challenged, there would be a lot fewer people on the air and in newspapers,” argues Jonathan Wald, executive producer of Piers Morgan Tonight.

Wald suggests that a blanket “rule” prohibiting the interviewing of people clearly suffering from delusions would mean a lot less coverage of newsmaking dictators, like Muammar Gaddafi (who CNN’s Kyra Phillips playfully matched up with Charlie Sheen in a segment asking whether Sheen was Gaddafi’s “brother from another mother.“)

Of course one reason why media shies away from suicide as a rule is that covering it thoughtfully would require talking about mental illness, which is a drag. It’s a lot easier to explain things away in more simplistic fashion. In a set of guidelines for journalists assembled by the Florida-based Poynter Institute, Cindi Deutschman-Ruiz suggested that suicide presents an opportunity to inform audiences about mental illness, mentioning a chef’s suicide that was reported as happening after he got a bad review:

When the media focus mainly on a bad review received by a renowned chef in Europe prior to his suicide, we overlook a serious depression he had for a long time before his death and squander an opportunity to talk about depression and its potential role in suicide.

In the Dallas Morning News, editor Michael Landauer argues that coverage of what’s happening to Charlie Sheen can serve a good purpose:

Is he sick? Yes, clearly — although I don’t know enough to diagnose what’s wrong. And I feel for his family. But the sad truth is that there are thousands and thousands of families dealing with situations like this, and highlighting this breakdown, taking people inside it, might actually help some people.

It’s interesting to see how ABC cut the interview in with clips from past interviews where he was clean and sober and of a sound mind. That seems to have unraveled. You can almost picture Sheen talking with Oprah a year from now talking about how messed up he was.

But precious few stories about Charlie Sheen come from a place of education on the ravages of mental illness and the stigma that surrounds them. Instead, it’s far easier to brush off claims of illness, and run with a simpler story. On Conan Tuesday night, Piers Morgan shared how he pitched the live hour to Charlie Sheen, saying “you’re sounding like you’re crazy, where I don’t think you are.” To Morgan, the entire Sheen episode boils down to “a man’s right to party.” Morgan, on his CNN program, described Sheen in exclusively positive terms, including “legendary Hollywood Hellraiser.” It’s okay, you see, because this is a guy in the middle of a massive party, not a television star in the middle of a manic episode in need of help.

Jarvis has argued that the media have crossed the ethical line with the neverending coverage of Sheen’s every bizarre word:

Is what Sheen says in his haze of insanity or drugs newsworthy? I don’t think so. I think it’s exploitation.

Perhaps the best “rule” for covering Charlie Sheen comes from author Tod Maffin, who believes Sheen is in the middle of a dangerous manic episode that could end very badly. He suggests a simple guideline: “If you wouldn’t make fun of someone with cancer, you shouldn’t be poking fun at Charlie Sheen.”