Chattering Classes Believe Jeff Zucker Will Become CNN Chief, Which Might Be A Really Smart Move

Chattering Classes Believe Jeff Zucker Will Become CNN Chief, Which Might Be A Really Smart Move 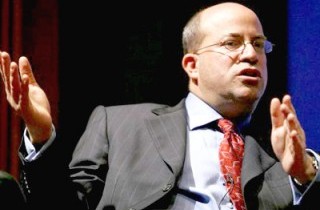 We’ve previously speculated here on the most likely candidates to fill Jim Walton‘s soon-to-be-vacant seat as President of CNN Worldwide.

HBO co-president Richard Plepler, Today Show Executive Producer Jim Bell, and CNN News Networks Digital Ad Sales President Greg D’Alba were three possibilities being considered in the immediate aftermath of Walton’s announcement. But in the days since, we’ve heard that Plepler expressed only tepid interest in the job and Comcast is working to keep Bell in house.

Throughout the process, however, the most often discussed candidate publicly, has been former NBC chief Jeff Zucker. These days many in the media elite are overtly speculating that Zucker will actually get the gig.

Of course, Zucker as CNN Worldwide chief would be a great source of controversy. As CEO of NBC Universal, he drew the scorn of many media critics and columnists. His infamous handling of the Conan-Leno feud was deemed “one of the biggest debacles in television history.”

And under his leadership, NBC’s prime time lineup fell from being the number-one rated among the broadcast networks to being in last place. The Los Angeles Times described his tenure as “a spectacular fall by the country’s premier television network.”

But Zucker’s failures were far more widely covered then his enormous success in leading NBC’s cable assets — a record which would be directly relevant to the CNN job. On the news side, he can be largely credited with guiding MSNBC out of the gutter and establishing it as an actual competitor to Fox and ultimately beating CNN.

Under his leadership, MSNBC and sister financial news network CNBC logged record profits and ratings unseen up to that point. Cash cow Today (which he produced and led to its dominance in the morning show wars) expanded to four hours and remained the number-one morning show until after he left. Nightly News retained its perch atop the network news shows under his guidance.

But what is often forgotten in the media is how much success he achieved with NBC Universal’s entertainment cable assets like USA, Bravo, Syfy and Oxygen — all of which became ratings leaders and increasingly profitable under his leadership. As one top media executive tells us: “He had his setbacks and made some mistakes but there is no one who understands the news business, and arguably cable, as well as Jeff Zucker.”

But would the relationship work? Zucker is likely bound to his ownership/executive producing of Katie Couric‘s new talk show for some period of time. And maybe just as important, being President of CNN Worldwide is effectively a #3 post. At NBC, Zucker was top dog of a huge corporation while at CNN he would answer to Turner Broadcasting CEO Philip Kent who reports to Time Warner CEO Jeffrey Bewkes.

If Zucker was willing to accept that reporting structure, CNN might be really smart to offer it to him. We shall see as this parlor game of predicting who gets this coveted position continues.
— —
>> Follow Andrew Kirell (@AndrewKirell) on Twitter