Chaz Bono Tries To Explain ‘Transgender’ To A Befuddled Letterman 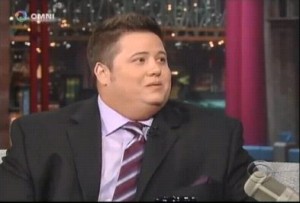 Chaz Bono made headlines when he decided to undergo gender reassignment, leaving behind his identity as Chastity Bono – the little girl America remembered posing alongside famous parents Sonny Bono and Cher. Bono appeared on The Late Show to discuss his new book, Transition: The Story of How I Became a Man and host David Letterman was… slightly confused by the whole concept, to say the least.

Chaz explained that, when he was younger, he believed he was a lesbian because he mistook his sexual orientation (as in, he’s attracted to women) with his gender identity. “Right there, you have encapsulated my confusion,” Letterman said. “Explain to me the difference between ‘sexuality’ and ‘gender.'”

Sexuality, Chaz explained, describes who you’re attracted to, i.e. whether you’re straight, gay, bi, what have you. Gender identity has two components: Your physical self (in Chaz’s case, this refers to the female body he was born with) and the way you picture and feel about yourself. As you can imagine, this can make puberty particularly hellish for transgender kids. “I’m still struggling with mine,” Letterman sagely noted.

Letterman was able to ask some heavy questions concerning transgender people: Can you be both homosexual and transgender? How does the transgender community feel about their inclusion in gay and lesbian issues? Is this a disorder, or a condition? Can environment impact whether a person is or isn’t transgender?

At one point, Chaz laughingly told Letterman, who kept asking questions about sexual orientation, “We have to get you off this homosexual thing!”

Watch the interview, via CBS: