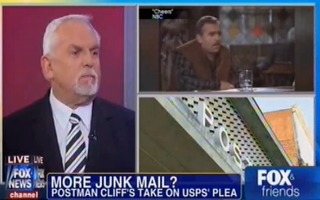 Actor John Ratzenberger, the actor who portrayed the postal worker “Cliff Clavin” on the sitcom Cheers for many years, appeared on Fox & Friends Thursday to promote his new jobs training program “M.O.S.T.” Ratzenberger is, apparently, not as big a fan of the post office as the character he played on television as he said it would be best for the federal postal system to be privatized.

“You have bureaucrats running something that should be run by a businessman,” said Ratzenberger. “Why would you put a civil servant or a bureaucrat at the top of that pyramid and say ‘okay, run the shop?’ They never work.”

Ratzenberger was also asked to weigh into presidential politics as it relates to his jobs training program and the dramatic reduction in high school-age kids who take advantage of vocational training programs.

Host Gretchen Carlson asked Ratzenberger about Vice President Joe Biden who “recently was talking about manufacturing jobs and he was pretty much slamming Mitt Romney for his take on it – where do you fall?”

“Well, what they’re talking about is all moot because we haven’t trained anybody for manufacturing jobs,” Ratzenberger replied. “There’s no more shop classes, no industrial training, no wood shop, no metal shop.” Ratzenberger blamed school budget cuts but also the proliferation of law suits that force risk-averse schools to drop vocational training programs.