Chelsea Handler: ‘Everything That’s Printed About Me Is a Lie’
VIDEO

Chelsea Handler: ‘Everything That’s Printed About Me Is a Lie’ 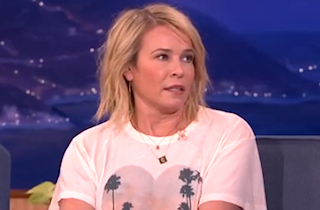 Chelsea Handler sat down with Conan O’Brien Monday night to discuss the rumors that have been flying around concerning the future of her career ever since she announced she would be leaving her late night talk show on E! later this year. In O’Brien, Handler had a sympathetic ear who is used to people speculating about what he will do next.

“I have to move on, I get very bored,” Handler said of her decision to “retire,” adding, “I had a great time, but I’m ready to take a little bit of a break.”

As for the rumors about future opportunities, Handler said, “Everything that’s printed about me is a lie.” She told O’Brien that “everything’s an option” right now, from doing a show for Netflix to making a move to radio. But what she really wants to do is go to Spain, a place “where men don’t understand what I’m saying.”

One thing they did not discuss was the possibility of Handler taking the soon-to-be-vacant 12:35 a.m. time slot on CBS following the new Late Show with Stephen Colbert. Even before Craig Ferguson announced he would be leaving The Late Late Show later this year, Handler was helping to fuel the idea that she could take his spot on the network.

She recently told Ellen Degeneres, “I would never go to CBS.” But that was before she knew Ferguson was leaving. Now that he’s officially out, perhaps she will change her mind.