Chen Guangcheng Sits Down With Anderson Cooper: ‘My Suffering Was Beyond Imagination’ 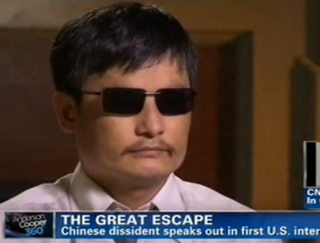 Chinese dissident Chen Guangcheng gave his first one-on-one interview since landing in New York today, talking to Anderson Cooper, detailing his journey to America and admitting that he was worried for the family he left home during his at least one-year stay planning in America.

Chen refused to use the term “house arrest,” instead preferring “illegal detention,” and telling Cooper that “my suffering was beyond imagination” locked up there. He said of the arrests that “it would be dishonest of me to say I’d never thought of it, but I didn’t imagine they would disregard the law so blatantly.”

Chen also explained how he got into this mess as a dissident to begin with: filing a class action lawsuit against the government for women who had suffered forced sterilizations and abortions through the government. “It was very natural for me [to act],” Chen explained, “I feel it’s in people’s nature to want to stop evil and embrace the good. So there was really nothing special there.”

Of the things he has enjoyed the most since coming to the United States, the sunlight has been among the best, he says. “I hadn’t been able to feel nature for a long time,” he notes, so his first full day in America, “I had some time to soak in the sun and feel the breeze. I have missed out for too long.”

Chen told Cooper he had “no regrets” about the outspokenness he had exhibited, and thanked those who supported him. And while he did admit he was very worried for his family still in China, he appeared hopeful: “If the pressure in Xiangdong couldn’t silence me, I don’t think any other pressure will be able to silence me.”