Cheney Defends Spying on Allies: ‘Never Know What You’re Going to Need When You Need It’
video

Cheney Defends Spying on Allies: ‘Never Know What You’re Going to Need When You Need It’ 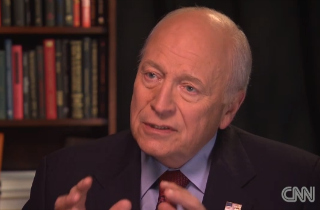 In an extensive interview airing later today, Dick Cheney defends the concept of spying on American allies. While not expressly commenting on the latest NSA revelations regarding that exact question, the former vice president said such surveillance operations might be necessary to remedy our “vulnerabilities.”

Over the weekend, reports surfaced that the NSA had been conducting surveillance operations on American allies, including German Chancellor Angela Merkel. Such programs reportedly began as far back as 2002, leading CNN’s Jake Tapper to ask former VP Cheney “Why spy upon an ally?”

“If there were such a program, it’d be classified and I couldn’t talk about it,” Cheney responded.

“We do have a fantastic intelligence capability worldwide against all kinds of potential issues and concerns,” Cheny replied. “We are vulnerable, as was shown on 9/11, and you never know what you’re going to need when you need it.”

He added: “We do collect a lot of intelligence, without speaking about any particular target or group of targets. That intelligence capability is enormously important to the United States, to our conduct of foreign policy, to the defense matters, to economic matters. And I’m a strong supporter of it.”

As for NSA contractor-turned-leaker Edward Snowden, the former vice president said: “I think he’s a traitor. I hope we can catch him at some point, and that he receives the justice he deserves.”