Cheney On Hannity: NYC Terror Trial Will Put 9/11 Plotter “On The Map” 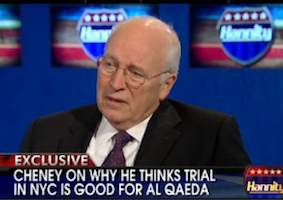 “It’ll put him on the map. He’ll be as important, or more important, than Osama bin Laden.”

Dick Cheney continues to be a thorn in Obama’s side that Obama can only ignore at his own peril. On last night’s Hannity, the former Vice President renewed his attacks on the current President over his decision to give 9/11 plotter Khalid Sheikh Mohammed, who Cheney called “one of the most evil men in history,” a public trial in New York City.

As Cheney presents it, Obama is being naive and “radical” for his largely idealistic commitment to an open trial, whereas Cheney, the realist, knows better, and would give Mohammed a military trial in Guantanamo if he was in charge. This is all ground that has been trodden on before.

The boldest part of Cheney’s spiel, though, was his assertion that the trial would make “KSM,” as Cheney called him, “as important [as], or more important, than Osama bin Laden.” That is, the giant media platform that the trials will provide him with will let him reach millions worldwide with his anti-America message. There’s also the concern that some of the evidence against Sheikh Mohammed will be tainted, if it’s not thrown out entirely, because it was obtained by waterboarding him — which Cheney personally approved. Then again, Cheney and his supporters can point to the Justice Department memo — released by the Obama Administration — which asserts that a ‘9/11-type attack in Los Angeles‘ was prevented thanks to intelligence gathered by waterboarding Mohammed.

Whether or not Cheney will be proven correct in the end — and let’s hope, as he surely hopes himself, that he won’t be — Obama continues to brush aside his criticisms at his own peril. If the purpose of the New York City terror trials is as much about sending a message as it is about bringing Khalid Sheikh Mohammed to justice, comparing one of their most vocal, politically distinguished critics to Rush Limbaugh and calling it a day just doesn’t cut it.