Cheney to Stephanopoulos: GOP ‘Got Whipped’ in 2012, Time for ‘New Generation’
VIDEO

Cheney to Stephanopoulos: GOP ‘Got Whipped’ in 2012, Time for ‘New Generation’ 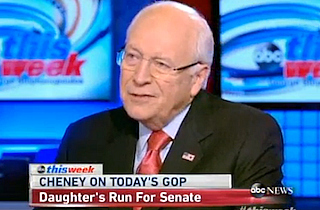 Former Vice President Dick Cheney appeared on This Week With George Stephanopoulos Sunday morning, where he encouraged the GOP to look to a younger crop of candidates to refresh its image, and touted his daughter’s campaign against Mike Enzi (R-WY), a Cheney family friend.

“We got whipped” in 2012, Cheney admitted. “A lot of us thought we were going to pull it out. That didn’t happen. We clearly need to spend time and effort on building the base, building the party, making it a full-time professional operation, in terms of the [Republican National Committee].”

Stephanopoulos argued that the GOP needed less base-building and more outreach, and asked Cheney if he thought any younger Republicans might be able to broaden the GOP’s electorate. Cheney refused to name a particular candidate, but did argue that the GOP needed to be more inclusive.

“It’s not the first time we’ve gone down this road,” Cheney continued. “It’s healthy for the party to be brought up short, and say, ‘Okay, now it’s time to go to work. We need to look to our basic strategy, our personnel.’ It’s time to get a new generation involved.”

Stephanopoulos pressed Cheney on Liz Cheney’s senatorial campaign, noting that Enzi felt “blindsided” by her challenge given his long friendship with Cheney.

“Mike also said he and I are fishing buddies,” Cheney said. “Which is simply not true. Never happened.”

Cheney argued that Enzi had received more out of state money than any senator in either party, while 25% of his daughter’s funds were from Wyoming.

“Washington is not going to elect the next senator from Wyoming, the people of Wyoming will elect that senator,” Cheney continued. “I think it’s a great campaign, she’s going full-speed, she’s going to win.”