Chernobyl Diaries: Reducing A Nation’s Decades Of Suffering To A Get-Rich-Quick Scheme
video

Chernobyl Diaries: Reducing A Nation’s Decades Of Suffering To A Get-Rich-Quick Scheme 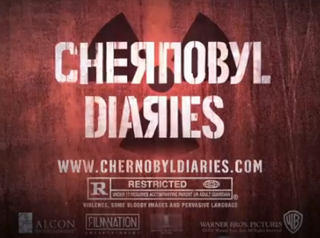 Littering the formidable mudslide of Hollywood summer blockbuster ephemera this year is a film promising all the one-note scares of every other summer horror flick with a hint of radioactive former Soviet waste. The movie Chernobyl Diaries debuts in theaters tomorrow with plenty of frights and horror movie stereotypes– and total disregard for the long-suffering history of the people of Ukraine and Belarus, who live with the health effects and mental challenges the disaster caused to this day.

RELATED: This Exists: Online Game Lets You Run Your Own Nuclear Power Plant

The film’s trailer shows a cast of characters familiar to anyone who has seen Scream or I Know What You Did Last Summer: a haughty tragic hero frat boy who will inevitably succumb to his own hubris; a bevy of gorgeous women who will follow him to his (and their) deaths; the guide meant to help them who makes the visit to Pripyat go horribly wrong. But the film doesn’t go too deeply into why Pripyat and the great Chernobyl area is just so dangerous, nor does it detail the tragedy that befell the people on the region.

On CNN earlier today, Brooke Baldwin and HLN’s AJ Hammer reviewed the reaction to the film and the small but loud group that condemns the use of Chernobyl as a backdrop for a casually scary horror film. Hammer makes the point that “you’d have to be in your thirties at least to remember the disaster,” and the marketing clearly targets young viewers– meaning many don’t know enough about the situation to question the film’s premise or its acceptability in the realm of good taste. Hammer is right that the understanding of the Chernobyl disaster is such in the myopic historic world view of many in the United States that few will think twice about the film, that given the 26 years that have transpired between the event and today, many would just assume that the victims of Chernobyl are few and far between, and the situation has been contained. Kiev’s decision to allow disaster tourism into the Pripyat area corroborates that to a certain extent. But that’s not how nuclear disasters work– the physical and mental toll on the people of Ukraine (and Belarus, which received 70% of the fallout), is immeasurable and long-lasting, and merits a respect absent this production.

The Chernobyl disaster is arguably– and in my estimation– the single most malevolent event in the history of humanity. Its narrative contains every fundamental human evil: the hubris of individuals who believed they could contain the immense power of a nuclear plant without requisite safety gear; the delusion of communist Moscow in believing they could lie to the entire population of the Ukranian SSR and, as the fallout spread, to the entire continent of Europe; the suppression of critical thinking of an entire people to the point that residents of Ukraine and Belarus believed their government when they were told they could return to their homes in three days, and that the fallout was negligently dangerous. On the night of April 26, 1986, the workers at the Chernobyl plant had obvious signs around them it was time to turn the plant off– they reported to Moscow they were seeing pieces of the uranium core outside their windows after an explosion– but Moscow told them to turn the energy production levels up, not down. The children of the residents of Pripyat escaped their parents on night trips to walk around the fire and touch the fallout. None of this was avoidable, all a product of slow-motion human error.

The toll of the Chernobyl attacks on the then-Soviet people, as with all information governed by the Soviet Empire, is arguable, as the government refused for many years to acknowledge anyone had been harmed save the five or so workers who died in the immediate aftermath of the explosion. According to the UN, about fifty lives are attributable directly to the Chernobyl attacks. This does not include the numerous cancers and previously unseen diseases (among them “Chernobyl heart,” known medically as a ventricular septal defect– a hole in the heart that sends poisoned air otherwise to be filtered by the heart into the body, killing the victim. The number of Belarussian children exhibiting signs of this defect after the disaster are in the tens of thousands. The victims of a disaster on this scale– victims routinely dismissed and disrespected by a state that, thankfully, no longer exists– deserve better at this stage in the history of the disaster than to be the backdrop for yet another needless forgettable two-hour scare.

That’s not to say the subject matter is untouchable in film form– films that explore the darkest parts of human history are often the greatest in the medium, and the suffering of hundreds of thousands of innocent people who happened to live in the region is a narrative ripe for the picking. But this film is clearly not about the suffering of a people who, straining under the yoke of communism, were befallen with the indignity of having the Soviet regime’s malevolent incompetence poison their homes to the point of unlivability. This is a film about some bros who think it would be fun to visit the formerly thriving city of Pripyat, Ukraine, and are led by their stereotypical Ukranian tour guide into some scary places. This film is a get-rich-quick scheme on the backs of a nation too vulnerable to fight back, too willing to forget to have to be forced to remember.

The number of deaths and injuries caused by the disaster will be debated for centuries to come. The toll the event has taken on the identity of the Ukranian nation is unmistakeable, and those unfamiliar with the emotional wreckage left behind atop the physical wreckage should become acquainted with it enough to reject the exploitation of this pain. For those that have not seen it, the 2007 short film White Horse elegantly packages a nation’s pain in 20 minutes of video– a trip back to Pripyat by a man who once lived there, at the age of 12. Had the directors of Chernobyl Diaries seen the pain, individualized, one hopes they would have thought twice to reduce it to a marketing ploy.