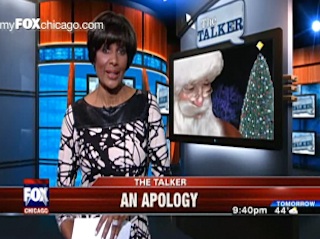 Yesterday, we had a few laughs watching Fox News reporters doing a story on a mall Santa accident and going out of their way to stress that the man wasn’t the “real” Santa Claus. Well, looks like they had the right idea as a Chicago anchorwoman got in a whole ton of trouble after saying on air that the jolly, old elf wasn’t in fact real.

And, um, just so I can cover all my bases, she was lying. Totally lying.

Yes, Fox Chicago’s Robin Robinson knee deep in the reindeer stables this week after a Tuesday night segment on whether or not, in this economic climate, mall Santas should try to downplay kids’ expectations. If that weren’t depressing enough, Robinson wrapped it up by declaring that she didn’t believe you should tell kids about Santa at all. Watching the moment, you can see Robinson has the clear look of someone with a strongly held opinion they probably shouldn’t share. Finally it bursts out of her and she tells viewers her feelings that, once kids are old enough to talk, the Santa fantasy should be just that; fantasy.

“Tonight’s Talker is about me talking too much without thinking about who else might be in the room with the adults watching the news.

And since I try not to make the same mistake twice: Warning, we are about to talk about Santa Claus again. You might want your children to leave the room (which is what we should have said last night).

It was careless and callous to say what I said in what could have been mixed company. So many kids don’t get to be children that for those who can live the wonder and magic of Christmas, I would never spoil it intentionally. I sincerely apologize!”

As if that wasn’t enough, Robinson’s self-flagellation continued. She then had to walk the streets of the Windy City, telling random people of her crimes against humanity, and interviewing them for their thoughts. The clip of that bit is pretty amazing. Watch as the light goes out of these people’s eyes and they look at Robinson like a dead woman walking. To use another crime metaphor, I imagine this is what it’s like when convicted sex offenders have to go door to door introducing themselves to new neighbors.

The whole thing’s pretty hilarious. Especially since, like I said before, Robinson was lying. Santa is real. He’s totally really. Super duper real.

Watch both clips below, first her comments and then the apology segment: