The View: Citywide Chick-Fil-A Ban Is An Attack On Freedom Of Speech
video

The View: Citywide Chick-Fil-A Ban Is An Attack On Freedom Of Speech 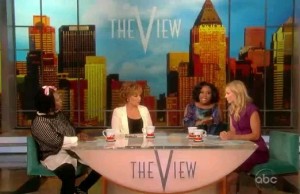 The View panel took on recent announcements from the mayors of Boston and Chicago that Chick-Fil-A restaurants would no longer be welcome in their cities due to the company’s well-documented efforts to fund opposition to gay marriage. The panel was mostly in agreement about the issue of gay marriage itself (Elisabeth Hasselbeck explicitly announced her support so that she wouldn’t get emails after the show), and that wasn’t even the only point on which they agreed! As usual, however, it took a lot of interrupting to reach that consensus.

Hasselbeck couldn’t understand why city mayors, whose “main job is to make sure the Constitution is upheld,” could tell a company that they weren’t welcome. She also thought that the controversy had failed to ask the “right questions” — namely, whether Chick-Fil-A had discriminated against employees based on sexual orientation. Whoopi Goldberg raised a point about being banned from certain restaurants as an African-American when she was growing up, but she was interrupted by Joy Behar (“I’m here too…we all want to say something on this one,” she said), Hasselbeck, and Sherri Shepherd, who were concerned that the mayors’ actions were an attack on Americans’ freedom to hold opposing viewpoints.

It was an interesting argument, as companies and individual human beings appeared to be interchangeable concepts in the course of the conversation. When Goldberg was finally “allowed” to finish her point, she argued that, even though restaurants used to ban non-whites from patronizing them and the country has come very far since then, “it’s still America,” and therefore people shouldn’t be limited based on their perhaps unpopular opinions. This oblique opposition to the ban elicited loud applause from the studio audience.

You can see the full clip here, via ABC: