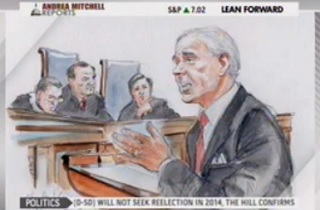 The optimism that Jean Podrasky, cousin of Supreme Court Chief Justice John Roberts, displayed when she told The Los Angeles Times that she “trust(s) he will go in a good direction” in deciding whether same-sex couples have the right to marry” may have been misplaced. On MSNBC’s Andrea Mitchell Reports Tuesday afternoon, fill-in host Chris Cillizza played some sound, from today’s oral arguments on Proposition 8, in which Roberts compares gay marriage rights to forcing a child to call someone a friend.

Jean Podrasky is the 48 year-old cousin of Chief Justice Roberts who is present in the courtroom today, and who hopes to marry her own same-sex partner one day. Here’s what she told The LAT:

Jean Podrasky, 48, a lesbian who wants to marry her partner, will be at Tuesday’s U.S. Supreme Court hearing on Proposition 8 in seating reserved for family members and guests of Chief Justice John G. Roberts Jr.

“I am so excited,” said Podrasky, an accountant and the first cousin of the chief justice on his mother’s side. “I feel quite honored and overwhelmed.”

…“He is a smart man,” she said. “He is a good man. I believe he sees where the tide is going. I do trust him. I absolutely trust that he will go in a good direction.”

…Although Podrasky has no personal knowledge of her cousin’s views on same-sex marriage, she expects the court will overturn the 2008 ballot initiative, leaving her free to marry Fasano.

“I am definitely ready,” she said.

Not so fast. In one of the early pieces of sound to emerge from oral arguments, which analysts pore over for clues as to a judge’s leanings, Roberts made a particularly brain-dead comparison that might portend disappointment for his cousin. “If you tell a child that somebody has to be their friend,” Roberts said, “I suppose you can force the child to say ‘this is my friend.’ but it changes the definition of what it means to be a friend. And that’s, it seems to me, what (supporters?) of Proposition 8 are saying here. All you’re interested in is the label, and you insist on changing the definition of the label.”

Clearly, Roberts was referring to opponents of the California measure, although it’s hard to tell what word he was using there, but as is usually the case with conservative views on civil right’s, Roberts has it exactly backwards. In Roberts’ simplistic analogy, the child isn’t being forced to call anyone his friend, he is being permitted to call someone a friend. Others may continue to argue, and believe, that they’re not friends, but the law ought to allow the child to call his friend a “friend,” and the government ought to recognize that friendship, just as surely as it ought not dissolve anyone else’s friendship.

The perfect part of this analogy is that it exposes the paternalistic, condescending view of a man who has the privilege of not ever having had his own rights attacked, looking down on the children who seek to gain what he has always had. If Prop 8 is to be struck down, it looks like it may have to be without Papa Roberts.