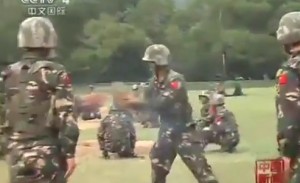 A viral video featuring six Chinese soldiers playing “pass the grenade” is burning up the YouTubes, mainly because the grenade they’re passing around is, according to the video’s title, a live one. The soldiers pass some kind of smoking object around, then toss it into a pit, and hit the deck as something explodes. I don’t know why they’re doing it (my guess is they’re testing the absorbency of their combat underwear), but their routine is a near-perfect metaphor for the 2012 presidential election.

Now, on its own merits, this video could be seen as an attempt to make the world view the Chinese military as a bunch of unhinged super-badasses, but for me, the real takeaway is that Chinese grenade technology appears to have just now caught up with Dick Dastardly. As Atlanticwire points out, the details of this video haven’t really been authenticated, either. For all we know, they could be passing around an Applebee’s Fajita Skillet, and ducking a remotely-triggered explosion.

Still, it’s good, clean fun, and it does serve as a handy metaphor for the 2012 presidential race. The soldiers are, of course, the candidates in the GOP field, and the grenade is their party’s nomination. While they’ve all had a chance to hold it for a second (except Jon Huntsman), one of them will eventually be thrown into the pit of the general election, and President Obama’s billion dollar incumbent campaign machine. Ka-boom!

I know that seems like wishful gloating from a liberal (and the President’s reelection is far from certain), but most conservatives would concede that this is a weak field of candidates. The reason for that is that so many better-qualified candidates (Mitch Daniels, Chris Christie, Jeb Bush) decided to wait this one out, rather than face the prospect of unseating a popular (at least personally) incumbent with a war chest the size of Fort Knox.

In fact, if I had the $10,000, I would bet it with Mitt Romney that Gov. Chris Christie doesn’t end up his VP nominee. That’ll be the surest sign nobody thinks he can beat President Obama, because a Vice President Christie would be well teed-up for a 2020 run, but a 2012 loss will be a liability in 2016.