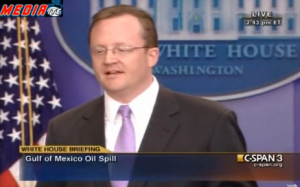 Since Barack Obama first burst onto the national scene, many have complimented him for his thoughtful and dispassionate demeanor (remember those Spock comparisons?). However, with the oil spill in the Gulf getting worse by the day, many are starting to wish for a little more fire from the president. So, when Robert Gibbs mentioned that Obama was “enraged” about the spill, CBS’ Chief White House Correspondent Chip Reid wanted to know if that was true and if, perhaps, there wasn’t enough rage from the administration directed at BP, the company who seemed to be lying to them.

When Gibbs would only say that Obama was “frustrated” with BP, Reid pointed out that “frustration” and “rage” are two very different things and asked what an enraged Obama even looks like (the image of Obama throwing chairs got quite a few chuckles from the rest of the corp). Gibbs assured him, behind closed doors, Obama was very much enraged, even occasionally using the D-word! After he’d spoken, Reid asked a question many had been wondering: is BP lying to the administration?

“I’m saying, you’ve got this difference over the 20% which the administration, you say they were uncomfortable. It seems like that’s a pretty mild response to it. And then, at the press conference, the president said that they have an interest in minimizing things. It sounds like you’re suggesting that BP is lying to the administration. Wouldn’t you have a stronger response to that?”

Gibbs wouldn’t admit that BP was “intentionally misleading,” just not “forthcoming.” Reid then asked if Obama trusted BP to which Gibbs would not give a yes or no answer.