Chris Christie Fires Back At Rand Paul, Accuses Him Of ‘Pork Barrel Spending’ And More
video

Chris Christie Fires Back At Rand Paul, Accuses Him Of ‘Pork Barrel Spending’ And More 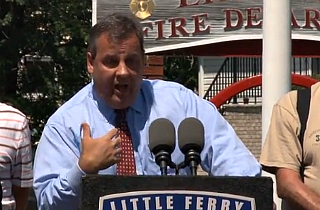 During a press conference this afternoon, Gov. Chris Christie (R-NJ) fired back at Sen. Rand Paul (R-KY), calling him a “pork barrel” spender, among other things. The remarks continue an ongoing feud between the two elected officials that originated with the governor branding the senator’s strand of libertarianism to be “dangerous thought.”

“I got nothing personal against Senator Paul,” Christie said after expressing frustration with the media for taking his earlier remarks on the senator to have deeper meaning about a potential presidential run. “If we disagree on certain issues, we disagree. You know, his response seems that he has something personal against me, but that’s okay. He can just get in line on that front.”

The governor then went on the offensive, attacking Sen. Paul for his Monday night remarks to Sean Hannity that Christie has a “gimme gimme gimme” attitude towards federal funds:

“I find it interesting that Sen. Paul is accusing us of having a ‘gimme gimme gimme’ attitude towards federal spending when, in fact, New Jersey is a donor state. We get 61 cents back for every dollar sent to Washington. Interestingly, Kentucky gets a $1.51 on every dollar they send to Washington. So if Sen. Paul wants to start looking at where he’s going to cut spending to afford defense, maybe he should start looking at the pork barrel spending he brings home to Kentucky.”

Christie suggested Sen. Paul focus on that instead of attacking New Jersey. “But I doubt he would,” he concluded, “because most Washington politicians only care about bringing home the bacon so that they can get re-elected.”