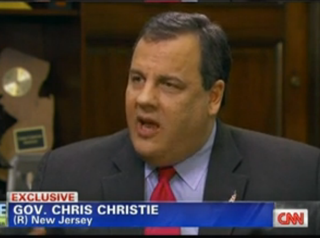 New Jersey Governor Chris Christie is very busy these days running his state, and during his extended conversation with Piers Morgan tonight took the time to discuss what what going on there, too. But Morgan led off the interview with Christie’s big national job as surrogate for Mitt Romney, a job Christie took to working on with gusto. Attacking President Obama for putting on a “theater performance,” Christie told Morgan he hoped people would be exposed more to Romney’s “enormous compassion.”

The conversation began on a light note, with Morgan pointing out that Christie’s office had plenty of pictures of Bruce Springsteen “and he doesn’t even like you.” “It’s unrequited love, Piers,” the governor joked. Morgan then opened to floor to questions about Romney in a roundabout way, pointing out that his favorite interview question was “how many times have you been properly in love,” and that its answer from current Republican voters should be problematic to Romney. Christie began his answer noting that Romney was “a reserved type,” and that he agreed with many critics that “it benefits him to get out more and let people see more sides of him, to see the enormous compassion that he ask.” He replied ti was “wrong” to think of Romney as spineless the way his critics portray him, and took that attack to Rick Santorum, noting how much money he brought to Pennsylvania in pork as a Senator. “Let’s not go overboard with him being true to his conservative principles,” he warned.

He did not attack Santorum as much as he attacked President Obama’s teleprompter “theater” performance, telling voters, “if you think that’s genuineness, vote for him.” He defended Romney from his use of the word “severe” to describe his conservatism during his speech at CPAC, and, upon being prompted to explain why he was willing to “put your reputation behind him,” rattled off a number of reasons, including his executive experience, but ultimately told Morgan that he as surrogate could only do so much to help. “It has to come from inside him and if it doesn’t, he won’t win,” he said earnestly. “In the end, he has to win the nomination, he has to win the presidency.”

The beginning of the interview via CNN below: