Chris Christie: ‘I’m Huggable And Lovable’ But No One Should Pick Me As Vice President 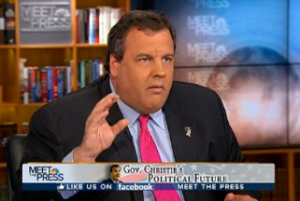 New Jersey Governor Chris Christie appeared on Meet the Press to speak about his success on budgetary issues in New Jersey, to admit he’s not loved by all, and to not back down from his recent declaration to a constituent that some issues are “none of your business.”

During a prior television appearance, Christie gave the agitated response to a voter who questioned why he cuts funding for public schools when he sends his own kids to private school. David Gregory didn’t doubt that Christie was right on the substance of his answer, but wondered whether the chief executive of a state should be using such a harsh tone of voice. Christie didn’t hesitate for a moment to say “damn right he should. You know why? Because this is who I am.”

Christie reiterated his belief that personal decisions are “not appropriate for public inquiry” and refused to apologize for his bluntness. Instead he maintained, to Gregory’s amusement, “I’m huggable and lovable. I am not abrasive at all.” Since Christie believes Americans are tired of all these other politicians who sound exactly the same, he’s happy to continue being honest with exactly how he feels. That might also explain why he was quick to throw cold water on the idea that he’ll be part of any presidential ticket in 2012. Gregory wondered about the possibility of him potentially being considered as a running mate and Christie responded, “the person who picked me as Vice President would have to be sedated. Seriously, forget it.”