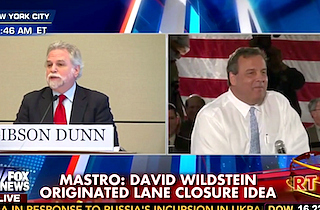 On Thursday morning, Chris Christie-appointed investigator Randy Mastro revealed the findings of a ten-week investigation, comprising 70 interviews and 250,000 documents, that he said cleared the New Jersey Governor of prior knowledge of the traffic lane closures on the George Washington Bridge last September.

Mastro added that the knowledge of the lane closures was limited to Kelly and Port Authority official David Wildstein, with whom he said the idea originated, and did not include any other Christie administration members. He also reported that while the investigation found evidence of an ulterior motive to the lane closures, there was no indication that motive was to punish Fort Lee Mayor Mark Sokolich for refusing to endorse Christie in the gubernatorial race.

The investigation has drawn significant criticism, as Mastro’s firm has long represented Christie, and Mastro himself has represented the Port Authority; meanwhile, investigators were unable to meet the principal figures in the case, including Kelly and Wildstein.

Mastro also found that charges from Hoboken Mayor Dawn Zimmer — that Christie’s administration pressured her to approve a development project or else her town’s Hurricane Sandy relief aid would be revoked — were “not only unsubstantiated, but demonstrably false in material respects.”