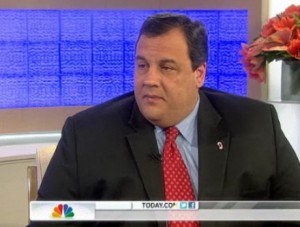 New Jersey Governor Chris Christie, the most visible of Mitt Romney‘s surrogates, has responded to the former Massachusetts Governor’s revelation that he pays about a 15% effective tax rate by going on a media tour suggesting that Romney release his tax returns now, rather than in April. Christie’s appearances on NBC’s Today Show and MSNBC’s Morning Joe show a subtle escalation in Christie’s call for quick disclosure.

RELATED: Mitt Romney Cops To Tax Rate ‘Closer To 15%’ And ‘Not Very Much’ From Speaking Fees

Before I get to Christie, though, it’s worth noting that The Today Show led into its Christie interview by reporting on, among other things, Romney’s gaffe about his $347,362.27 in speaking fees, which he characterized as “not very much.”

This is significant, because it’s one thing for that tin-eared declaration to be broadcast to the ThinkProgress crowd, but quite another for it to reach Today‘s much wider audience. Romney is trying to win the nomination now, but that audience will be judging him in the general election in months to come.

Host Matt Lauer started out by directly asking Gov. Christie if Romney should release his tax returns now. “You’re a full disclosure guy,” Lauer said. “You like it when politicians reveal their financial situations and tax returns. Is Mitt Romney missing the boat?”

He then started to sort of defend Romney’s decision not to release his tax returns until April, saying “The most relevant information is the most recent, April.”

Gov. Christie then volunteered, “My practice all along is I release my tax returns every year as soon as they are filed.”

Pressed by Lauer on whether Gov. Romney should wait until April, Christie said “He already started to speak yesterday, about the rate he pays. I would say if you have tax returns to put out, you know, you should put them out sooner rather than later because it’s always better in my view to have complete disclosure, especially as the front-runner.”

Here’s that clip, from NBC:

A few minutes later, though, Christie appeared on MSNBC’s Morning Joe, and urged Romney to release his tax returns now without even being asked about it. Panelist Bob Woodward asked about yesterday’s politically inconvenient, 99%-unfriendly revelation.

“What is your reaction to Governor Romney saying that he paid only 15% effective tax rate?” Woodward asked.

Governor Christie immediately launched into a call for Romney to release his tax returns now, a tangential response to Woodward’s question, at best. “First of all,” Christie said, “the way I’ve conducted myself all along, I’ve released all my tax returns, and I did it in the campaign, went back a number of years and I released them every year after I file them, right after I file them, to the public of New Jersey so they can see everything. (Romney) says he’s going to release them in April, I hope he does.

“In terms of the 15% effective rate,” Gov. Christie continued, “for people who know this, I don’t think it comes as any great shock because the guy hasn’t been having a job where he’s been getting income over the last number of years. And so he’s been getting money from investment income, which is taxed at a different rate. The fact is, let’s get all the facts out there, see what the tax returns say, and I think everybody will know the story is probably much ado about nothing.”

Gov. Christie is known for his outspokenness, but it’s hard to believe that he’s just off the reservation here. Christie’s framing of this issue might be an indication that Romney does plan to move up his timetable. Alternately, the New Jersey Governor’s application of pressure, if not calculated, will certainly make it difficult for Gov. Romney to wait until April.