Chris Christie’s Latest Decline To Make A 2012 Bid Is Convincing: ‘Why The Hell Would I Leave Jersey?’ 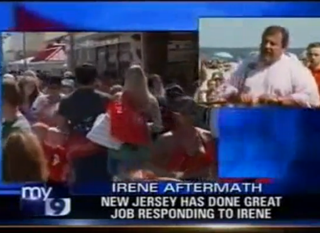 New Jersey Governor Chris Christie is having a bit of a rough time lately, though, unlike most politicians, through no fault of his own: Hurricane Irene hit parts of his state incredibly hard, and the President will be visiting the troubled areas tomorrow. Yesterday, however, the Governor managed to take a breather down the Jersey Shore, where he encouraged residents to support beach businesses and have a good time. To prove he wasn’t joking, he reminded the crowd of why he has repeatedly refused a run for the presidency himself: “Why the hell would I ever want to leave Jersey?”

After a lengthy speech encouraging people to hit Jersey Shore landmarks like Jenkinson’s and the Seaside Heights boardwalk, Christie reminded his crowd that “there’s no place in the world like the Jersey Shore” and, to make his point clear, he highlighted a certain decision he had declined to make: “People ask me all the time about running for President of the United States,” he remarked. “You know what I tell them? Why the hell would I ever leave Jersey, are you kidding?”

On a personal note, this humble editor would also like to clarify that this is precisely the same reason why I have decided to bow out of the 2012 race myself.

The comment, of course, got plenty of applause, as did his thanks to the “great people of New Jersey.” After a number of instances of Christie speeches going viral for all the wrong reasons, this upbeat moment after what was a disastrous natural phenomenon is, for many on the Shore, a relief.

The clip via New Jersey’s WWOR 9 below: