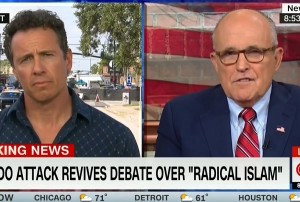 Former New York City Mayor Rudy Giuliani is all over TV again sharing his expertise about terrorism (when he can remember it), advocating for surveillance of mosques over on Fox News and trying to play the “Radical Islam” card on CNN Tuesday morning. Unfortunately, Giuliani’s talking point ran into a buzzsaw named Chris Cuomo, who absolutely destroyed both the analogy Rudy tried to use, and the whole “Radical Islam Phrase That Pays” talking point.

The interview started well enough, with Cuomo asking Giuliani if he agreed that it’s important to emphasize the fact that the victims of the Orlando mass shooting were gay. Giuliani was managing to be a decent guy for a few seconds, until he decided to shove in a dig at the President for not saying “Radical Islam”:

But it’s also part of the story this was an Islamic extremist-inspired murder. It would be like saying there was a mafia murder, and then another murder two blocks away. We wouldn’t say the word mafia murder, because Italian-Americans would get upset.

Giuliani spent a few more seconds reiterating the talking point, at which point Cuomo nailed him with it like a coked-up roofer:

Cuomo: You used an analogy. Let me reverse it on you. If every time the mafia made a killing or a murder, they said, well, those Italians, you know, there is something about them in the mob, something about the Giuliani, the Cuomo, you would have been disgusted, it motivated you as a prosecutors to distinguish the mafia from the rest of the Italians. That’s the point, you talk about these perversions.

Giuliani: No, notice I say “radical Islamic Muslims. I know many Muslims who are very, very good Muslims, as I knew many Italians who were very good Italians. When I used the word “mafia,” I didn’t mean all Italians.

The yuge difference is, of course, that the word “mafia” doesn’t have the word “Italian” in it, and although Giuliani cops to knowing many “very good Italians,” it’s doubtful he would suggest that Italians should welcome surveillance because they’ve got nothing to hide.