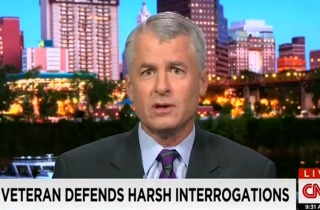 According to a Pew Research Center poll released Tuesday morning, 51 percent of Americans believe that CIA torture is justified, while just 29 percent objected to the tactics. And despite the revelations in the Senate Intelligence Committee’s “torture report” that the techniques were largely ineffective at producing actionable intelligence, even more Americans — 58 percent — believe that torture did, in fact, achieve that goal. These numbers, and more, were the subject of a heated conversation between CNN anchor Chris Cuomo and Philip Mudd, the former deputy director of the CIA’s counterterrorism center.

Mudd said the CIA’s intelligence efforts “decimated” those who carried out the 9/11 terrorist attacks, and wondered what the results of the Pew poll would have been had it been taken on September 12, 2001. Cuomo then asked Mudd if anyone in the CIA had the “common sense” to realize that maybe the torture tactics went too far — to which Mudd responded fiercely:

Excuse me, common sense? You have the majority of the American people still saying this is okay. We went to the people who determined what U.S. statutes say. They were clear. I personally spoke to members on both sides of the aisle in the Congress. They told me either ‘okay,’ or ‘is this it?’ — in other words, ‘aren’t you doing more?’ The mood of the population is reflected by the American security service. The mood of the population is, ‘this is okay, this is more than okay. And, by the way, if we see ever see another jumper from the 100th floor of a building in New York, it’s on you.’ You want to know what that’s like, Chris? We were dealt a hand of deuces, and we ran the table in the casino. I thought it was great work.

Cuomo countered whether it is smart policy to rely on the emotions of 9/11, but Mudd was not buying any of it. He criticized the Senate Intelligence Committee for not talking to people like him, and said the CIA was justified because it had approval from President Bush, the Justice Department, and both Republican and Democratic members of Congress, adding that the CIA was just “reflecting the will of the people.”

Cuomo then asked Mudd if he was essentially a “spinmeister for the CIA, selling [the media] on a program we didn’t really understand.” Mudd responded by asking how long New Day has been on the air and if it has been successful, to which Cuomo said the show has been doing “better than okay.” Seemingly taking a shot at the show’s ratings, Mudd said, “why are you spinning me?” and then returned to Cuomo’s question, asserting his view that the CIA was “crushing al-Qaeda.”

“Hell yeah I sold what we did,” Mudd added. “I believed it. And by the way, here’s a dirty secret: I was right. We did crush them.”