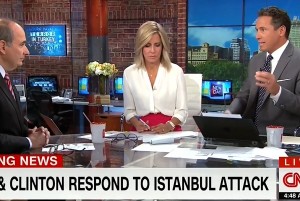 As presumptive Republican presidential nominee Donald Trump ramps up his calls to fight the barbarism of ISIS with more barbarism, CNN New Day anchor Chris Cuomo has found a fascinating analog to Trump’s tough talk: 2008-era Senator Barack Obama. In a discussion with former Obama senior adviser David Axelrod Wednesday morning, Cuomo compared the “visceral appeal” of Trump’s torture rhetoric with then-Senator Obama’s 2007 declaration that given the opportunity, he would unilaterally strike Osama bin Laden even if he were hiding in Pakistan.

Axelrod partially conceded the premise, while trying to draw distinctions between his former boss and his potential future president:

Axelrod: In that case, you know, he made a more visceral appeal, but it was also based on what he believed and acted on. He acted that on as president.

Cuomo: That’s what it was. People want to hear it.

Axelrod: That was a specific set of circumstances that he was responding to.

Axelrod’s objection aside, the comparison, while wildly divergent in degree, is illustrative. then-Senator Obama was, indeed, criticized by Republican and Democratic opponents alike at the time, and while he was no Donald Trump, his speech announcing the policy was notably lacking in the sterile diplomacy of the presidential model we see today:

There are terrorists holed up in those mountains who murdered 3,000 Americans. They are plotting to strike again. . . . If we have actionable intelligence about high-value terrorist targets and President Musharraf won’t act, we will.

Now, that election didn’t end up hinging on terrorism, but it’s no accident that after his post-inauguration honeymoon, the high point of President Obama’s approval ratings came after the raid in which he made good on that promise. Cuomo is on to something that Trump is on to something. There may be a limited market for the overt racism that Trump has been peddling, but a significantly larger one for bloodlust, the same bloodlust that allows most Americans to support a death penalty that they know for a fact results in the killing of innocent people in their name.