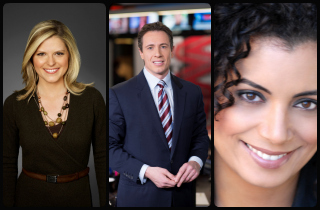 On Thursday morning, CNN officially announced its team for the network’s new morning show. New hire Chris Cuomo was already attached to the show, and now we know his co-host will be Kate Bolduan, who’s currently a congressional correspondent and co-anchors The Situation Room. Michaela Pereira will be the show’s news anchor.

“We were floored with excitement when we saw Chris and Kate together on screen, and by adding Michaela to the mix we feel we have something very special,” CNN president Jeff Zucker said.

Previously, there was some speculation that CNN primetime anchor Erin Burnett would join Cuomo for the show. The New York Times‘ Brian Stelter reported that Burnett was the original choice, but it didn’t pan out, “reportedly due to Ms. Burnett’s unwillingness to move to the morning time slot.”

CNN announced today that Chris Cuomo and Kate Bolduan will co-host the network’s new morning show, which will premiere this spring. Michaela Pereira will join CNN from KTLA Morning News in Los Angeles, as the program’s news anchor. News executive Jim Murphy will oversee the program as senior executive producer, and Matt Frucci will serve as executive producer. The show will be broadcast from CNN’s New York City studios.

“I’ve been looking forward to this announcement since I first joined CNN,” said President of CNN Worldwide Jeff Zucker. “Chris, Kate and Michaela are a dynamic team that will give our viewers in America a new way to start their day. We were floored with excitement when we saw Chris and Kate together on screen, and by adding Michaela to the mix we feel we have something very special. We believe there is an opening to do news in the morning with a fresh, new voice.”

Cuomo joined CNN in January from ABC, where his roles ranged from 20/20 co-anchor, ABC News chief law and justice correspondent and Good Morning America news anchor. In the first two months at CNN, he has led CNN’s breaking news coverage from the papal conclave in Rome to the State of the Union address in Washington. Bolduan joined CNN in 2007, and is co-anchor of The Situation Room with Wolf Blitzer. Bolduan also serves as one of the network’s Congressional correspondents. Pereira comes from the top-rated and award-winning KTLA Morning News.

“This has been a rare pleasure for me,” Cuomo said. “Meeting Kate and Michaela on screen and off, I knew right away that this is my TV family.”

“It is a huge opportunity to work on this new show,” said Bolduan. “Knowing that we have the resources of some of the most experienced executives in the business, the backing of a brand like CNN, and to be able to sit alongside such great people as Chris and Michaela – I can’t think of a better combination.”

“I couldn’t be more excited to join the CNN family and have the opportunity to be part of a brand new morning team,” Pereira said. “As a veteran of morning television being part of this new endeavor is a dream come true.”

Murphy joined CNN to oversee all morning programming for the network. Frucci will lead the daily direction of the morning show with Cuomo, Bolduan and Pereira.

“We have an all-star team in place,” said Murphy. “I love morning television, and this is a unique opportunity to create something entirely original. The opportunities are limitless – and that is exactly how we will approach the broadcast.”