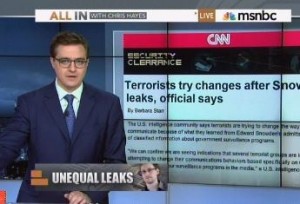 A growing array of politicians are outraged about the leaks of classified materials that have been reported in The Guardian, with people even raising borderline insane questions about the culpability of the person merely reporting this information. MSNBC’s Chris Hayes had perhaps the best rebuttal to their arguments tonight by pointing to an example of another government leak provided to another reporter about what the government knows about terrorist activity, which was not in any way condemned by anyone in government. Why? Because where the White House and Congress are concerned, there are good leaks and bad leaks.

Hayes’ poses this logical quandary: if revealing information about how we’re spying on people helps the terrorists, then are leaks that reveal we know the terrorists are changing their methods also aiding the terrorists? After all, that’s also an intelligence leak that directly reveals what we know about terrorist activity, not a broader revelation about widespread shooting ants in a barrel from the National Security Agency. Well, CNN’s Barbara Starr wrote a report with information leaked to her by anonymous administration and intelligence officials that reveal we know terrorists are changing their methods in response to leaks.

But no one, absolutely no one, who has attacked Glenn Greenwald and Edward Snowden has similarly condemned Starr and whoever leaked information to her. Why? Because it advances the Pentagon’s agenda, and no one really cares about leaks coordinated by the government to get out to the public.

Hayes admitted that he, being a simple cable news host, does not know what does or doesn’t help the terrorists, but he said that neither do the members of Congress making such wild and irresponsible assertions about the information reported in The Guardian.