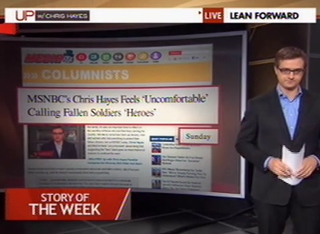 Chris Hayes began his program today with some unfinished business from the week before– comments he had made where he had argued that calling fallen soldiers “heroes” seemed too “rhetorically proximate to justifications for war,” which erupted in a firestorm of anger and criticism. “I cringed when I saw the headline used to describe the comments I used last week,” he explained this morning,” telling the audience “I fell short in a crucial moment” and agreeing with some of the criticism against him.

“I can understand entirely why someone reading those headlines would think, at a very minimum, ‘what a jerk,'” Hayes ceded, explaining that that was, in fact, a concise summary of much of what he heard from viewers. “Many responses I received via Twitter or email were profane,” he noted, but more importantly to him, he received messages from people “genuinely anguished by what I said,” people who had family who died in wars and objected to a TV personality decreeing they were not heroes. “Reading those messages,” Hayes explained, “I had to agree.” Hero, he continued, “hardly seems a designation that is mine to deny or even to confirm… which was, in a very clumsy way, what I was trying to say, or what I was trying to discuss.”

Hayes then explained what he was initially trying to say, which had less to do with “who is a hero” but the culture in which the word is used. “We live in a society that has become comfortable with war but tries to distance itself as far as possible… our political culture sometimes seems entirely engineered to hate each other.” He concluded that this was a program where the panels tried to “talk about sensitive topics in good faith… [but] I fell short in a crucial moment.”