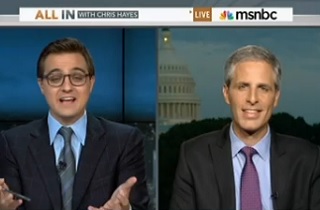 The long national pile of phone bills nightmare is not over, but it did get a debate and a vote on the floor of the House of Representatives, and All In with Chris Hayes host Chris Hayes and Salon’s David Sirota couldn’t be happier to see it. As little as I care about the NSA’s collection of telephone metadata, I have to agree with both men that the amendment offered by Rep. Justin Amash (R-MI) is exactly the sort of thing that the unproductive Conversation™ on government surveillance needs.

On Wednesday night’s All In, host Chris Hayes ran down the remarkable set of circumstances which allowed the Amash amendment to be debated, and voted down 217-205, on the House floor, despite opposition from the House leadership. That amendment would have stopped the National Security Agency data collection that was first reported in June, courtesy of fugitive leaker Edward Snowden. Ordinarily, Hayes explained, the majority leadership has complete control over what gets debated and voted on in the House. He tossed to Salon’s David Sirota to explain how the Amash amendment got around that.

“Traditionally, on appropriations bills,” Sirota explained, “there are narrow amendments that are allowed to be amended to those bills, which say, either block funding from something, or transfer something in the bill, or something else in the same bill. Very narrow rules, it’s hard to create a vote on a message on an issue on a big national question like this in such a narrow way. The people who put this bill together were skilled in the art of crafting such an amendment, and they created a crystal clear vote on whether the Congress, whether the House wants the NSA to be surveilling Americans that are not under investigation.”*

*That’s not exactly what the NSA is doing, but stick a pin in that.

Sirota went on to explain that Speaker John Boehner (R-OH) could have defeated the maneuver by wiping out all amendments to the appropriations bill, but that would have been too… hey! Wake up!

He also praised the “artistry” and bipartisanship that went into the amendment, while Hayes characteristically appreciated the dual nature of the debate (not including Michele Bachmann’s Muslim-baiting contribution).

I’m with them so far, at least philosophically, but then, Sirota added that “I think that that’s encouraging in the sense that those Democrats voted against their own president,” a sentiment that only an emo-prog could love. I could even get behind that losing political mentality if the principle of liberty at stake were real, but in practice, all these Democrats are doing is undermining their President. By which I mean they’re being Democrats.

The thing is that the Conversation™ around national security, first on drones, and now on surveillance, has mainly consisted of more whine than you can shake an Orson Welles at, which is infuriating. It’s like watching a bunch of people standing in the rain holding folded umbrellas, and bitching about getting wet. Open those motherf*ckers! You’re Congress, if you don’t like something that the government is doing, you can make a law about that shit!

So I have to admit that seeing the House actually try to do that thing they are supposed to do did kinda give me a call-your-doctor-worthy boner, too. It sure beats the hell out of listening to my friends drool over Rand Paul’s extreme filibustering, and it is the road map to fixing what’s really wrong with our national security policy.

However, blocking the NSA’s collection of metadata is a stupid idea, or at least, just blocking it. I don’t have any top secret clearances, but it doesn’t take a genius to see the usefulness of such a database. As card-carrying dorks, I’m sure Hayes and Sirota have seen the film Source Code, and if you haven’t, I recommend it.

I’m not as smart as most dorks, so I’m going to explain the film badly here, but the Source Code is a computer program that allows intelligence agencies to completely reconstruct the last 18 minutes before a terrorist attack, using metadata from the brains of dead people, I think. They can then send in a mostly-dead soldier to look around and see what happened, so they can find the terrorist. He’s not supposed to be able to change anything, but the power of Jake Gyllenhaal‘s love overcomes that limitation. Oh, crap, spoiler alert!

Anyway, the NSA data collection is like that. If there’s an attack, or a plot, or whatever, and they get a phone number out of it, they can go back and reconstruct what that phone number did, who they called, and who those people called, and when, and for how long, and maybe even fall in love. The problem is, if the NSA doesn’t collect the data, it gets destroyed, and all the people on that train died in vain. If Congress wants to make a law that says phone companies have to retain all of that data, that’d be fine, but I doubt that would get past the corporate citizens and their congressional guardians.

Besides, once they have collected the data, the government needs to get a warrant just to look at it, and if you’re thinking that getting a FISA warrant is easier than finding a white guy doing a cable news show, then you are on to something. Put up an amendment that de-funds the FISA court until it learns how to ever say no to something, and I’m right there with you. Unfortunately, there seems to be little political will to claw back the FISA court, or to repeal the Authorization for the Use of Military Force that provides the basis for that drone program everyone hates so much.

That Congress has finally shut up and put up on the NSA program is a step, but voting on laws that actually matter to national security would be a step in the right direction.