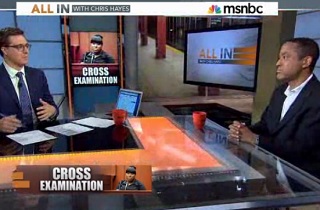 Rachel Jeantel, the star prosecution witness in the George Zimmerman murder trial, has been the subject of barely-masked racial and intellectual contempt since she took the stand on Wednesday, and on Thursday night’s All In with Chris Hayes, host Chris Hayes and linguistics expert John McWhorter called out the ugly treatment she has received. McWhorter delved into Jeantel’s consistent and articulate usage of “Black English,”  and he and Hayes called out the “willful” nature of defense attorney Don West‘s befuddlement at Rachel’s communication style.

Rachel Jenteal’s testimony has made an enormous impression on the George Zimmerman murder trial, as it was always destined to. She was the last person to ever speak with Trayvon Martin, with the exception of his killer, and what she heard that night is very important. The defense has tried to impeach some of her testimony, the success of which is a subjective matter, but the parts of her testimony that no one disputes are devastating to George Zimmerman’s claim of self-defense. Without uttering a single syllable, the mere fact that she was on the phone with Trayvon for two minutes after the George Zimmerman defense claims he returned to his car contradicts Zimmerman’s account, and demonstrates that he was, indeed, following Trayvon Martin. Martin’s own words, thus far uncontested, bear this out: “Why you following me for?”

As Hayes points out, whatever the jury believes about Rachel Jeantel, they surely believe that she is a reluctant witness, and aside from prior statements unrelated to the events of the night in question, the defense’s attacks on her testimony have amounted to the sort of imprecision you would expect from a reluctant witness, or inconsistencies that don’t matter all that much. If George Zimmerman came up behind Trayvon, and was asked why he was following him, it’s of little consequence whether he feigned panicky ignorance, or asked Trayvon what he was doing. The key fact is that George Zimmerman was stalking unarmed 17 year-old Trayvon Martin in the dark, with a gun.

That left Don West with a choice: dispose of his thin plate of impeachments concisely, and get this devastating witness off the stand, or go with the strategy that he went with.

“The reaction to Jeantel by court watchers has often been unkind, or on Twitter and social media, downright cruel and flat-out racist,”  Hayes pointed out, but added that some have rushed to defend her, citing an excellent piece of comentary by The Nation’s Mychal Denzel Smith, entitled Thank You, Rachel Jeantel. Smith commended Jeantel for standing up to ” the condescension and silencing and character attacks” on behalf of black youths everywhere. White race-deniers will call this an overreach, but what Smith has done is identify Don West’s strategy. More on that in a minute.

Hayes pulled McWhorter into the discussion by noting that “what we are watching in the courtroom, over the last two days, are two people from very different cultures, from very different linguistic backgrounds, encountering each other while all of America watches. It’s been an incredible thing to watch.”

“It’s been a little scary,” McWhorter said. “Sometimes it’s like she’s speaking Hungarian, and he’s speaking Cantonese. She’s been articulate, just in a different kind of English than mainstream English.”

“She’s speaking Black English,” McWhorter explained. “Everything she says, where you can see the Twittersphere, or people I know thinking she’s making a grammatical mistake. If a Martian came down and the Martian happened to be in South-Central rather than in Grand Rapids, the Martian would have as hard a time figuring out how this dialect worked as any other. She said in the clip that ‘I had told you.’ Many people are thinking, ‘Why is she using that?’ That’s Black English. My cousins did that when I was little. It’s the narrative pluperfect. Linguists talk about it.”

McWhorter began to talk about willful misunderstanding of Jeantel, and Hayes jumped in. “That’s it! Willful. thank you!” he said. “That’s the thing that has caught me here. I understand what she’s saying.”

He then pointed to a clip of West loudly and condescendingly ” translating,” for the entire courtroom, a statement Jeantel made about the mailing area.

McWhorter agreed. “She’s quite comprehensible. It’s just that people don’t want to understand her and the whole larger question.”

McWhorter also made a fairly devastating point against the no white people ever who were authentically aggrieved by Trayvon Martin’s alleged use of the word ” cracker” to describe George Zimmerman.

“Needless to say,” McWhorter said, “I think, given how the Trayvon Martin case went, there would seem to be some cause for some preliminary racial grievance for the poor boy, to have had somebody chasing after him for a reason he didn’t know. We do know that’s how it started. Of course he might be refer to the person as a cracker because he’s a human being. And since this week, we have heard that there are times when we might, perhaps, excuse some white people from using the n-word… I think we can understand that cracker may have been an appropriate term at the time.”

Jeantel, despite her language difficulties, also proved to be exceptionally sharp at various points in her testimony, particularly when West tried to Jedi-mind-trick her into saying that Trayvon “approached” George Zimmerman, and was batted away like a drunken mosquito.

To McWhorter’s final point, I would also add that, as reasonable as it is to infer that the term “cracker” was meant in the pejorative sense, it is also reasonable to infer that Trayvon Martin and Rachel Jentel came by their suspicion of white people honestly, through years of getting the stinkeye in retail establishments, and other white-dominated areas like America. It’s also reasonable to infer that making racial distinctions would be routine, and relatively neutral (as Hayes pointed out, the operative portion of Jeantel’s cracker quote is “creepy-ass”) for people whose entire lives are defined by racial differences that have been imposed on them. The White Whiners call it a “double-standard,” but chiding Trayvon Martin for calling a white person a “cracker” is like encountering a fish on the sidewalk, and scolding him for always thinking of people in terms of “gills” and “lungs.” A white person can go days, weeks, or even their whole lives without ever having to think about being white.

That’s the key to Don West’s strategy, though, to exploit those racial differences by turning Rachel Jeantel into a stand-in for Trayvon Martin, and making the jury see her as belligerent, unreliable, and alien. Hayes showed a little bit of this, but West’s cross was designed to be as laborious as possible, in service of two goals. By repetitively and haltingly dissecting every question, at length, and with frequent requests for Jeantel to repeat herself, West succeeded in irritating an already reluctant witness, provoking exchanges like the one Hayes showed. In doing so, West was able to leverage his cultural similarity with the jury into a stark contrast with Jeantel’s conduct, which fell well outside of those cultural norms.

West also took pains to repeat, as often as possible, verbatim quotes of Jeantel’s prior statements, accentuating the grammatical differences. This was particularly egregious in his multiple repetitions of what Rachel says she heard Trayvon say after his initial contact with Zimmerman, that he said “Get off.” At one point, Rachel testified that she ” heard a little bit of Trayvon saying ‘get off, get off.'”

West repeated this, and other such statements, over and over again, for reasons which I will not guess at because they should become evident as the defense puts on its case. To me, it came off as bullying and nakedly exploitative of racial differences, but all that matters, in court, is what the jury thinks. But it also matters what the rest of America thinks, and the shaming of Rachel Jeantel is toxic to that end. Good on Hayes and McWhorter, and Smith, for calling that out.