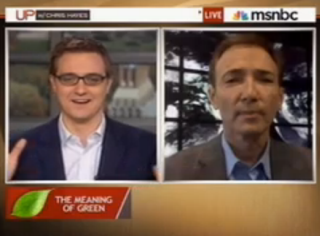 “I feel like I’m swimming upstream,” meteorologist Paul Douglas told host Chris Hayes today, as he explained he shares two concurrent sets of beliefs that often find themselves in conflict nationally: the belief that the global climate is changing and warming up, and the belief in small government conservatism. Douglas came on Up today to describe how he reconciles what science has taught him with how it is often politicized, and how he expects the private sector, and not the government, will help solve the problem.

Douglas, founder of WeatherNationTV and a decades-long meteorologist, began to describe the situation on the right by arguing that, while the far right had been fairly loud about many issues, “the common sense moderate middle has been largely silent,” and that they “still respond to logic, still respond to reason, still respond to sound science.” While he admitted he was “skeptical in the 1980s,” he perceived what he called “a steady accumulation of coincidences.” “The climate is a puzzle,” he explained, “by the time the last piece falls into place, it will be too late to do anything.”

Hayes highlighted the “steady accumulation of coincidences” remark to note that the need to look at individual events has also caused some who fail to believe in climate change to point at individual instances of weather and claim they prove climate as a whole is behaving in a certain way. “When winter was cold,” Hayes argued, “Fox News was like ‘it’s snowing in front of the White House, obviously global warming isn’t happening!'” He didn’t want to end up doing the same for the other side, so he asked, “how should I talk about this in a way that is scientifically responsible?”

Douglas provided a metaphor: “Mother Nature has a DVR, and she is putting our seasons on fast forward and turning the volume of severe volume up to an 11.” He noted that he had failed “we will figure out solutions, mostly market-based” because “smart companies are going to look at the liabilities involved, and they’re going to look at the opportunities.” The panel then weighed, in, with Christine Todd Whitman, former EPA head, noting that “it was Ronald Reagan who made climate change a part of national security discussions.” That Republicans seemed less able to believe in climate change also struck Bob Herbert as not entirely their fault, but proof that “the other side has not done a good job… have not fought back hard on the organized right.” Needless to say, Hayes did not quite agree with that.