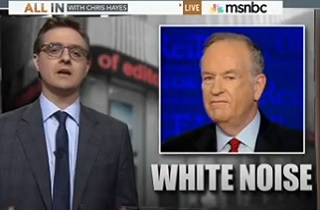 On Monday night, O’Reilly Factor host Bill O’Reilly delivered a lengthy critique of President Obama’s remarks about the death of Trayvon Martin, accusing the President of ignoring the “real problems” facing black people, including something he called “gangsta culture.”

Tuesday night, All In with Chris Hayes host Chris Hayes rebutted what he called O’Reilly’s “super-racist rant,” and said that if O’Reilly is any indication, the national conversation should be about the “problems with white culture.”

Several commentators, and not just on the right, have weighed in with similarly ” realist”  assessments of the racial landscape, but O’Reilly is probably the one with the largest audience to do so. Hayes took aim at O’Reilly, telling his viewers “You probably missed Bill O’Reilly’s super racist rant last night, before playing “some choice bits that give you an overall sense of the full thing.”

The clips Hayes played consisted of the sort of statistics that often get thrown around to make the “realist” case that O’Reilly was making, and concluded with O’Reilly’s boast that “You want a conversation? You got it.”

“He, Bill O’Reilly, only wants to create a better situation for blacks,”  Hayes interjected. “According to him, it’s liberals, people like you and me, who are ignoring the problems facing African-Americans.”

He then continued with a clip of O’Reilly mocking those who say the criminal justice system is unfair because of the disproportionate incarceration of black men for ” selling drugs.”

Hayes responded with statistics demonstrating the racial disparity that O’Reilly mocked, and promised that “everything he’s saying is easily debunked with about 20 minutes of googling.”

“That’s not really the point,” he continued. “The real reason Bill O’Reilly peddles this stuff is because it gives a cheap cracklike high to the old fearful white audience that watches Bill O’Reilly, and gives Fox News its power, also known as the Republican base. These are the folks Bill O’Reilly is feeding when he laments not being able to criticize black culture.”

“That’s because race hustlers and the grievance industry have intimidated the so-called conversation,,” a clip of O’Reilly played, “turning any valid criticism of African-American culture into charges of racial bias.”

Hayes then accused O’Reilly of having a limited view of black culture, invoking O’Reilly’s 2007 account of a dinner with Al Sharpton at Harlem’s Sylvia’s restaurant. “”There wasn’t one person in Sylvia’s who was screaming, ‘M-Fer, I want more iced tea,'” O’Reilly said at the time. “You know, I mean, everybody was — it was like going into an Italian restaurant in an all-white suburb in the sense of people were sitting there, and they were ordering and having fun. And there wasn’t any kind of craziness at all.”

Hayes concluded that “If Bill O’Reilly is representative of white culture, with his stereotyping and his victim-blaming and domineering tone, then I’m pretty sure we need to start having a national conversation about the problems with white culture.”

Here’s the clip, from MSNBC’s All In: