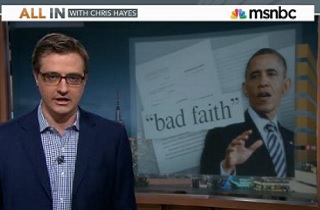 Former Up/current All In host Chris Hayes got All Up In President Obama‘s grill on Friday night, blasting the President over his administration’s recently-overturned decision to restrict the availability of Plan B emergency contraception to girls under age 17, and even threw in a few shots at Obama’s remark about California Attorney General Kamala Harris. Hayes quoted, at length, criticisms from the judge who overturned the decision, and from the New England Journal of Medicine, and pointed to the issue as evidence of parallel political universes: “There is normal politics, and crazy vagina politics.”

The discussion that followed was probably the most engaging of All In‘s young life, as Hayes alternately joined panelists Nancy Northup, Zerlina Maxwell, and Eesha Pandit in offering a qualified defense of the politics behind the President’s decision, and continuing to argue against the decision itself.

In December of 2011, the Obama administration decided to overrule the Food and Drug Administration’s determination that Plan B should be available over the counter, with no age restriction. HHS Secretary Kathleen Sebelius announced that the drug would be available to women and girls 17 and older, but would still require a prescription for those under 17. At that time, President Obama sold the ruling by evoking images of little girls being marketed Plan B “alongside bubble gum and batteries.”

That decision was struck down this week by Judge Edward Korman.

Much of Friday night’s discussion centered around the naked politics of that decision, versus the substance of it. The choice offered wasn’t pretty. President Obama is either a purely political animal who was describing the ad that he feared would run against him if Plan B were placed next to the bubblegum, or a paternalistic ignoramus who doesn’t understand science.

Karen Hunter was the only panelist to agree with the substance of the President’s policy, echoing his statement at the time by wondering “do you want your 11, 12, 13-year-old going in and getting this next to the tick tacks and the thin mint and being able to just do this without your permission, without any kind of parental guidance whatsoever?”

Hunter also, at one point, referred to Plan B as an “abortion pill,” and was immediately called out for it. The rest of the panel seemed to agree that the best thing for the President to do now, the way to prove his decision was a practical, forgivable political one, would be to not appeal Judge Korman’s decision. Eesha Pandit framed the issue as one of reproductive freedom, saying “The question I care most about is what context young women are growing up in, and what they are being taught to think about, their own access to reproductive healthcare. Do we want them to grow up in a context where they are talking about shame and fair and stigma about what they need, or think they need, or walking into a pharmacy and getting what they need?”

“I’m feeling old,” Hunter countered. “I grew up in a time when 12 and 13-year-olds shouldn’t be having sex. We are talking about girls, not women’s rights, but girls who don’t have the capacity to make these decisions, now able to go in and willy-nilly get this without any checks.”

There is the essential tension in this story. Like any good feminist, I was revolted by the President’s use of the bubblegum image to push a stigmatized view of emergency contraception, and the seemingly anti-science bent of the decision. At the same time, though, I understood the logic behind not choosing this particular battle, when weighed against the larger picture of being able to retain power, and being able to advance women’s rights in far more meaningful ways.

I also don’t agree with Hunter that girls should be forced to get permission from their parents, necessarily, although it would be a better world if they could, if they felt free to talk about their sexual activities with their parents. That’s what I would want as a parent, but what I want more than that is for my kids to be safe. Forcing a kid to go to her parents, even those she may have a great relationship with, is an obstacle that could delay or prevent her from getting the emergency contraception she needs.

On the other hand, and this is something I think the President failed to articulate, Plan B differs significantly from acetaminophen, or other safe, over the counter medicines, in that it is used to treat a potentially dangerous condition, especially for a very young girl. Karen Hunter is right, these are not women, these are girls, and if a 12 year-old girl is buying Plan B, I would like someone to ask her a few things. For example, if she’s had unprotected sex, does she want to get an HIV test? Is there anything else about the encounter that she might want to report, or even just to talk about? We have consent laws for a reason, a very good reason, so while confidentiality is absolutely essential to getting girls to find the help they need, there are compelling, non-moralistic reasons to desire some sort of intervention in this transaction.

Requiring a prescription is the most readily available way to accomplish this, the “plug-and-play” option, but as the panel points out, it means that even for adults, Plan B must be kept behind the counter, reducing the overall use of the drug. Getting a prescription can also significantly delay the purchase of the drug, which has a limited window of efficacy. Maybe there’s some sort of compromise that could be made, requiring Plan B manufacturers to staff a hotline that could offer this intervention to girls, confidentially, at the point of purchase.

Of course, many (but not all) of these issues apply to underage boys as well, but you don’t hear anyone talking about putting condoms behind the counter, and making them jump through hoops. It’s not fair, and I would love to see boys get the same sort of advice and opportunity, but the effect there would be to deter condom use, which harms boys and girls. With a Plan B purchase, the potential harms are all on the girls, and are past being prevented.

President Obama’s decision may well have been heavily motivated by politics, and/or an ill-defined paternalistic intuition, but given the absence of a better alternative, I don’t think letting Judge Korman’s decision stand is necessarily the right thing to do.

Here’s the clip, from MSNBC’s All In: