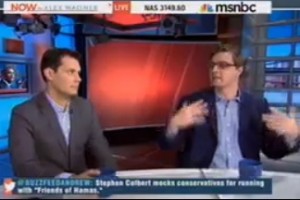 Hayes was right when he said that this is a complicated story, because it interweaves legitimate and non-legitimate criticisms of both the President and the press corps that covers him. Hayes and Alex Wagner disagreed over whether President Obama gives fewer press conferences than any other president (Hayes was right, President Obama held many times more solo press conferences in his first term than President George W. Bush, and about the same total overall), but the President’s supporters point out that he has given many more interviews than past presidents.

The White House’s attention to TV isn’t that surprising, given the medium’s reach, and the immense number of interviews (something like 500) the President gives is a decent defense, since even if 90% of those interviewers completely suck, he’s still getting a decent grilling. My problem is that he rarely grants an interview with a member of the White House press corps, who know every syllable he and his staff have ever said, and who are, thus, tough to sneak anything past. President Obama faces well-prepared interviewers, I’m sure, but there’s no substitute for that kind of immersion, and I don’t think it’s an accident that the reporters who know him best don’t get the lengthy sit-downs.

The Huffington Post’s Sam Stein chimed in, “I  am a member of the White House Correspondents Association. I have not gotten an interview,” and added that there’s a big difference between access and transparency.

“I think there’s a problem with both,” Stein said. “It’s not about golf. Screw golf. Golf is an idiotic way to start this fight.”

“That, to me, is what is so revealing.” Hayes said, before honing in on “where they chose to plant their flag.”

He went on to single out WHCA President Ed Henry for not writing a letter about the drone memo, and concluded. “Where do you plant your flag and that shows what your values are. You can’t walk back and say this is also about drones. If it’s about drones, then go after him on drones.”

There were many other excellent points made in the segment, which you should watch all of, but this particular criticism ties together many of the common misunderstandings about this story, and the job of White House reporting itself. First of all, I’m sure Chris didn’t mean it literally, but Ed Henry didn’t write a letter about drones because that’s not what reporters do. We don’t collectively seek information, we do it individually. Some reporters, like Michael Isikoff, develop sources, and get them to leak stuff, but a White House reporter’s primary opportunities to make news are by asking tough questions of the President and his staff, and doing that requires access.

By the same token, Ed Henry didn’t write that letter as a reporter, but as the head of the WHCA, a group that negotiates ground rules with the White House, and for reporters. We do that collectively, to increase our individual opportunities to do our jobs. As Sam said, a golf game is an idiotic thing to make a big deal out of, but that’s the whole point. That’s why it was a last straw.

The last time I was in Washington, the President was scheduled to arrive at the White House on Marine One in the evening, on a day during which nothing else was happening at the White House. Marine One arrivals are open press, so I headed over there just to cover that one thing before heading home to New Jersey, and after waiting around for a couple of hours, found out that the plan had changed. Due to the weather, the President would be arriving via motorcade, instead, and the press office changed the availability to pooled press only. There was only one other non-pool reporter besides me, so I asked if they could let us cover the arrival as well, since it was the only reason any of us had shown up to begin with. For no reason at all, the answer was “no.”

Is a motorcade arrival a big deal? Not at all. All arrivals are horribly boring things to cover, and reporters skip them if at all possible. What made this galling was that there was just no reason for it, it was reflexive. If the lunch lady won’t give you an extra slice of pizza, you understand, but when she denies you an extra napkin? That’s messed up. Tiger Woods was more than an extra napkin, but not quite a slice of pizza.

I’m not saying that White House reporters are creatures of pure light, unconcerned with filthy considerations like clicks and ratings, but that wasn’t what made Tiger Woods a tipping point.

That’s not to say that Ed Henry is some kind of reporter’s Norma Rae. In a bit of fence-mending, the President held an off-the-record meeting on Thursday with “reporters from major print and television outlets,” with nary a White House grunt in sight. Everybody’s got to fight for their own turf, it seems, but it’s what you do with it that counts.

Here’s the clip, from Now with Alex Wagner: