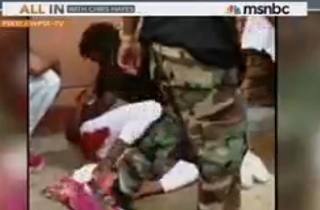 In a news cycle that has been dominated by fulminating stories like the Cleveland kidnappings and the Benghazi hearings, and now the political intrigue of the unfolding IRS scandal, Monday saw scant attention paid to a story that would seem like wall-to-wall coverage material: a mass shooting at a Mother’s Day parade in New Orleans that left 19 people wounded, including two children. On Monday night’s All In, host Chris Hayes and channel-mate Melissa Harris Perry called out the attention deficit being played out on this example of “street violence.”

Hayes began by showing chilling frames of surveillance video of the shooting, as a man in a white t-shirt begins firing into the scattering crowd. He put a name to the apathy that crimes like this engender by quoting an FBI spokesperson who called the incident “strictly an act of street violence.”

He turned to fellow MSNBC host Melissa Harris Perry, and asked “That is in your hood, that is very, very close to where you live. What are people saying there right now, after this?”

Harris-Perry, who lives in the Seventh Ward, explained what a common sight these second line parades are where she lives. “Typically when the second lines come by our house, there’s dancing in front of our street,” she said. “So the idea that 19 people were shot, even if no one was killed, the idea those bullets were flying into that crowd feels extremely personal. And I think, you know, this is part of what those of us who live in cities like New Orleans, or Chicago, or Detroit, where the gun violence is rampant and it rarely gets any attention, we have for so long been saying we need people to pay attention to this.”

“You know, I thought that line, I want to ask you what you make of that line,” Hayes said. “This was street violence. I saw this on social media. Shooting in New Orleans. And then it was like, oh, oh, oh. That’s just, you know, gang-bangers in New Orleans, probably a black neighborhood, you know, that’s just life in the big city. Street violence isn’t terrorism, it’s not terrifying, it’s not terror that is being visited on people every day.”

Hayes and Harris-Perry went on to make some excellent points about the issue of race and gun control, and the peculiar gun-cultural makeup of Louisiana, but it was that quote about “street violence” that really jumped out at me, too, when I read the initial reports. There was a bizarre lack of information available, Sunday, on a story that seemed like it should have been huge, and when I woke up this morning, I was genuinely shocked to see it was not leading the news on any of the cable networks. Having immersed myself in tales of gun violence for so long, this story filled me with an overwhelming sense of gratitude that no one had been killed, but nineteen people being sprayed with bullets at a Mother’s Day parade should have been a huge story. We get wall-to-wall reporting and assets on the ground for the Boston bombing, which deserved it, and the Cleveland kidnapping rescue, the Jodi Arias trial, and the Carnival poop cruise, which were treated with varying degrees of overkill, but next to nothing for the 19 people shot down in New Orleans. No on-location morning show anchors, no moving theme song/graphics package, no live press conferences, no hard-won law-enforcement leaks.

There are points to be made about this shooting, and the gun violence in places like Chicago, which are surrounded by wild-west gun laws that undermine any local efforts to restrict access to firearms, but from a media standpoint, someone needs to explain to me how Hayes is wrong, or how this Mediaite commenter, who described this dynamic in the bluntest, most stomach-churning way, is much different from the news editors who gave this story the cold shoulder:

Oh cut the crap.
This is black on black gangbanger violence.
The crime that dare not speak it’s name.

Are we not allowed to just say it….?
This has nothing to do with gun control or the NRA.
These are young sociopathic and amoral black youths who acquire a gun not for self protection but for offense.
When they get their hands on a gun they intend to use it.

That attitude, as sickening as it is, is the footprint left by a mainstream media that clearly favors white victims over black ones, and as much as I hate to admit it, likely cowers at the prospect of dealing responsibly with black suspects, a fear they’ve earned by dealing so irresponsibly with them in the past.

Thankfully, one suspect, 19 year-old Aiken Scott, has been identified, and will hopefully be brought to justice shortly. In the meantime, news editors should be asking themselves why “if it bleeds, it leads” only seems to apply to a certain kind of blood.

Here’s the clip, from MSNBC’s All In with Chris Hayes: