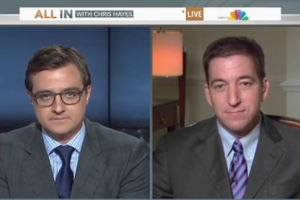 Chris Hayes believes that the information Edward Snowden released about secret NSA surveillance is something the public is better off for knowing, but as he told Guardian journalist Glenn Greenwald on his MSNBC show today, he is concerned about Snowden’s recent international activities. He brought up Snowden’s admission that he took a job with the contractor Booz Allen Hamilton to collect more information on the NSA with the express purpose of exposing more information, and expressed his personal concern that Snowden may end up in a country with a leader not generally considered a “beacon of openness.”

RELATED: Greenwald Blasts Critics Who Claim He ‘Aided And Abetted’ Snowden: ‘I Call That Investigative Journalism’

Greenwald told Hayes he has not spoken to Snowden since he boarded a flight from Hong Kong to Moscow. Hayes asked Greenwald about Snowden’s motivations in wanting to release the surveillance information. Greenwald insisted “most of our focus” should be on the programs Snowden exposed and members of the Obama administration lying to Congress, and that should not be conflated with the discussion over Snowden’s motivations.

Hayes made it clear he thinks the information Snowden has released is “vital” and that it’s ultimately better to know than now to know. However…

“I am worried that if he ends up on the balcony of Raul Castro at some point in the next week, it will be as if everyone who has been championing the revelations has walked out onto a limb that they are now standing on with, that is then going to be sawed off behind them, because now, Mr. Snowden the whistleblower is in the hands of someone like, say, Castro, or someone else who people generally do not view as a beacon of openness.”

Greenwald clarified that Cuba is not Snowden’s ultimate destination, saying that the NSA whistleblower will likely end up in Eduador. However, he maintained that it shouldn’t make a difference how Snowden ends up, and the bigger question should be on why someone like Snowden feels the need “to go and flee” the United States after leaking this information. He concluded, “Whistleblowers have no chance in this country.”