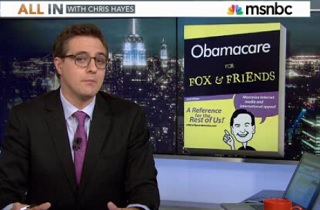 With the opening of state health insurance mere days away, and an apocalyptic fight over de-funding Obamacare raging in Congress, attention to the Affordable Care Act is at an all-time high, while accurate information about it remains at an all-time low in certain quarters. On Friday night, All In with Chris Hayes host Chris Hayes held a brief For Dummies-style tutorial for Fox & Friends‘ Steve Doocy, and called out his rival for failing to do his job.

Hayes introduced the segment with a clip from his Thursday night interview with Rep. Renee Ellmers (R-NC) in which the Congresswoman elicits priceless reactions of earnest dismay from Hayes with her rapid-fire delivery of Obamacare disinformation. Then, accompanied by a graphic of a For Dummies book entitled “Obamacare for Fox & Friends” (get it? They’re dummies!), proceeded to correct some of the show’s misimpressions about the law.

He played a clip of Steve Doocy complaining about a delay, until November, in the implementation of online small business health insurance exchanges, which Hayes patiently explained is not the end of the world, since the plans don’t go into effect until January 1. “That’s like complaining you haven’t gotten your hamburger yet from a restaurant that doesn’t open until next freaking week,” Hayes said.

The key point here, though, is that health insurance is complicated, and in critiquing F&F, Hayes generously allows that their confusion may be genuine. Being confused about health insurance doesn’t make you a dummy, it just makes you like most people. It’s an incredibly complex subject, and much more difficult to explain than complain about. It’s also incredibly important. That’s why the news media, in fulfilling its duty to inform the public, has a higher than normal responsibility to bring clarity to the issue.

As Hayes put it, “Laws are big and often complicated, and it is genuinely difficult to figure out the details. They’re confusing, and what might happen in the future is difficult to predict. But that’s what those of us in the news media are paid to do.”

If that’s the case, then precious few of them are earning that paycheck.

Here’s the clip, from All In with Chris Hayes: