Chris Hayes Explains Why Solyndra Bankruptcy Is Not A Scandal 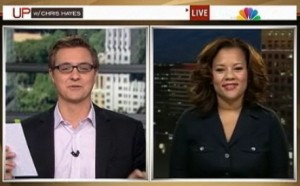 On Sunday’s sophomore edition of Up with Chris Hayes , freshly-minted host Chris Hayes took on the burgeoning Solyndra “scandal,” and made the case that it was, at worst, a case of bad optics. House Republicans have been trying to make a dollar out of this fifteen cents, and the conservative media have been peddling it like funnel cake, but despite Jon Stewart‘s credulous purchase of the “scandal,” it doesn’t really amount to much upon closer inspection.

The short version of the Solyndra story is that the company received $535 million in loan guarantees from the government under a Bush administration program that was expanded by President Obama‘s 2009 stimulus law. The company was touted by the Obama administration as a shining example of the potential for a green economy, only to go bankrupt earlier this month.

House Republicans have released emails that show doubts about the risks posed by such a loan, but a key linchpin in elevating this from mere shitshow to scandal has been the involvement of Obama fundraiser George Kaiser, whom many media outlets have reported was a major investor in Solyndra.

As Hayes points out, though, Kaiser himself was not a Solyndra investor, his family’s non-profit foundation was. That doesn’t change the fact that Kaiser had frequent access to the White House, or that his opinion might have carried extra weight, but it does mean that whatever he did regarding Solyndra was not done for his personal benefit.

Additionally, Fox News is reporting that House Republicans have been massaging the truth a bit by selectively releasing emails that make it seem as though the Bush administration put the kibosh on the Solyndra loans. According to emails obtained by Fox News, though, the Bush administration said Solyndra’s application “has merit,” and recommended that the vetting process continue.

Those same emails also show that Solyndra officials pressed hard to get the deal done in the waning days of the Bush administration, hardly the actions of a company who had bought and paid for the new guy.

Republicans have also been using Solyndra as an indictment of the stimulus bill, citing the 1100 workers who lost their jobs in the bankruptcy (even though the other side of that coin is a CBO-estimated 3 million jobs created or saved), and of the very idea of investing in a green economy, but as Hayes guest Phaedra Ellis-Lamkins of Green for All points out, the Solyndra failure is just one out of forty projects that this program has funded.

Conservative Reihan Salam of the National Review didn’t bother to argue that Solyndra amounted to a scandal, and really didn’t want to engage Ellis-Lamkins on the broader issue of the role of government in industrial policy. “I respect Phaedra and what she’s doing,” he said, “but I just kinda feel as though she has a strong point of view, and I don’t think I can ask her a question that she will then answer in the spirit of ‘Let’s figure this out.'”

Ellis-Lampkins said, “I appreciate your concern about my ability, always appreciate that, but I think the disagreement we’re having is, what’s the role of government?”