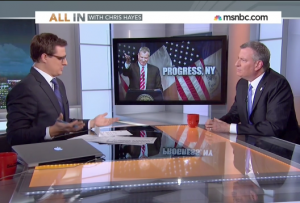 Last month New York City Mayor Bill de Blasio gave an off-the-record, closed press speech to AIPAC, the incredibly influential pro-Israel political lobby. A reporter was escorted from the event, but they managed to capture audio of de Blasio’s speech. In the speech, de Blasio said AIPAC should feel free to call him whenever they need him to stand with him “’cause that’s my job.” After his speech, meant for no one, got circulated all over the web, de Blasio defended the speech, saying, “Part of my job description is to be a defender of Israel.”

At the end of a lengthy interview on MSNBC Wednesday night, Chris Hayes brought up the story and challenged de Blasio on that premise.

De Blasio insisted he was simply stating his own beliefs and “speaking as the mayor of a city that is the closest to Israel of any city on earth.”