Chris Hayes: If Republicans Think Being A Mother Is Work, Why Isn’t There A Wage?
video

Chris Hayes: If Republicans Think Being A Mother Is Work, Why Isn’t There A Wage? 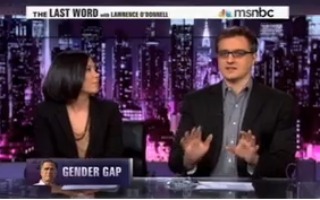 Appearing on Lawrence O’Donnell‘s The Last Word Thursday, Chris Hayes lamented the political firestorm that erupted over Hilary Rosen‘s comments that Ann Romney never had to work a day in her life, calling the media coverage of the controversy “absolute substance-less idiocy” and questioned if Republicans really thought being a mother was work then why weren’t they compensating women?

“Do you think there are any women voters out there who are fooled into thinking something that they should base their vote on is happening today in this dialogue?” O’Donnell asked Hayes.

“Yeah, I mean, we should be clear, this is substance-less idiocy,” Hayes opined.

“And Chris, we will give it another five minutes!” O’Donnell joked.

Hayes then went off on how other countries actually did in fact compensate mothers and if the Republican Party thought being a mother was work — why weren’t they supporting maternity pay?

“It’s completely feigned outrage — it reminds me of the lipstick on a pig comment, which was a idiotic fake outrage over Barack Obama, but at least in that case, Barack Obama actually said it. Hilary Rosen is just a person that said something on television! It’s like do I have to go on my show this weekend and distance myself from Hilary Rosen because she too said something on television, is that that actually the logical connection? It because she is a Democrat. Should every Democrat have to endorse, vouch for every statement and opinion made by every other Democrat in the entire nation, that seems to be the logic that is being applied here. Just to clear it out of the way. I do think like no, there’s no way in which this actually effects the election in any demonstrable way. And there’s something fascinating at the core of this. there’s a huge a of uncompensated labor in the country by men and women, mostly women, who stay home and take care of their kids. And there are countries where that labor is compensated by the state. So I would love to have that conversation, if they actually think it is work and they feel it’s work, why isn’t there any wage for that kind of work? Why is that uncompensated?”

Hayes’ comments check out as the United States is the only remaining industrialized nation that doesn’t require at least some employers to offer a paid maternity leave.