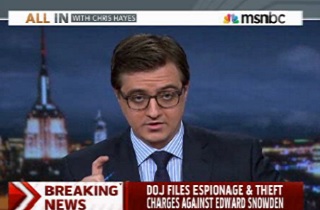 On the heels of the revelation that the U.S. government has charged Edward Snowden under the Espionage Act, All In host Chris Hayes interviewed Snowden promoter Glenn Greenwald, and despite an obvious sympathy for the embattled leaker, managed to push back on several of Greenwald’s talking points. Unfortunately, Hayes also missed a few opportunities to put Greenwald’s agenda in perspective.

Hayes’ adeptness at effective devil’s advocacy is one of the keys to his appeal, and he did better than a lot of Snowden-sympathetic interviewers do. When Greenwald began fanning himself at Snowden’s espionage charges because, my goodness, it’s not as if he sold classified information to another government, Hayes pointed out that he isn’t being charged with doing that.

“I don’t think you will find very many people argue that he should not be charged with any sort of a criminal offense,” Greenwald replied, which would have been a good time to point out that this is exactly what the Snowden cheerleaders have been suggesting. Even before the NSA story, the mainsream annd liberal press were beside themselves at the notion of the government even investigating so-called whistleblowers.

“I think when he did, what he set out to do, was a violation of the law, and he felt like it was a noble act, justified under theories of disobedience, and I don’t think anybody is objecting to that,” Greenwald continued, which would have been a fine time to ask him what, then, did he think Snowden’s charge should be, what his punishment should be? Greenwald is an attorney, so it shouldn’t be hard for him to come up with that. As an attorney, he also surely knows better than what he said next.

“I think the extreme zealousness, the over-charging of the Obama administration has specialized in, when it comes to whistle blowers, is the issue. He is 29 years old, and will be threatened with life in prison, the way other whistle blowers were. The extreme excess that has a vindictive mentality to anybody that brings transparency to the administration.”

Hayes did point out that there is currently an investigation into the Stuxnet leak, which could balance out the claim that the administration doesn’t prosecute beneficial leaks, but that premise itself is in need of challenging. An “approved” leak from a government source isn’t exactly the same thing, since it’s their information to leak. The ability to inform, or disinform, our enemies without completely declassifying something is as useful a tool a secrecy. Whether journalists should allow themselves to be used this way is a separate question.

What Hayes didn’t do was to point out that all of the record number of people who have been prosecuted under the Espionage Act by the Obama administration have been sentenced to a combined 50 months in prison, and a year’s probation. As a lawyer, Glenn Greenwald surely knows that a prosecutor always files the maximum charges appropriate to a case, which allows for negotiation to lesser charges and/or sentences, if the circumstances warrant it. Yes, Edward Snowden’s charges could get him life in prison, but that hasn’t happened to the other leakers.

Hayes also doesn’t point out that not all leakers are created equal. While we all appreciate the favor of Starting The Conversation™, some of us would have preferred to have it a few weeks ago, when another guy tried to start it without telling our enemies how we’re surveilling them. Greenwald likes to glibly dismiss the idea that Snowden could have harmed national security by observing that our enemies know we’re spying on them. At a minimum, though, if our enemies think that they’ve found a way to work around us, we want them to keep thinking that. Don’t they get The Wire in Brazil?

I’m not impressed with Ed Snowden’s revelations, but that’s a subjective thing. I also don’t think Stephen Kim was a “whistleblower,” but rather, a guy who got played like a rented drum kit. Whistleblowing is in the eye of the beholder, and the last beholder I want deciding that is the government. Let them prosecute leakers, and let judges and juries decide: