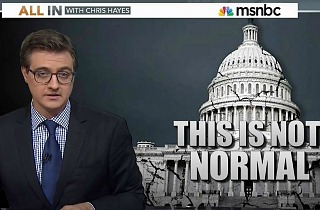 MSNBC host Chris Hayes had some bad news for those poor, misguided defenders of America’s founding document on Wednesday night. The present crisis in Washington, one of several that have paralyzed the nation’s capital after Republicans won a sweeping victory in 2010 and ushered in a period of divided government, is the fault of the United States’ Constitution. As such, there is no solution to the government shutdown but to address its source: the lack of foresight displayed by the Founding Fathers.

“We are right now, as we speak, as you listen to my voice, headed towards a full-blown constitutional crisis,” Hayes declared. “That’s the growing consensus among a number of extremely astute political observers.”

Hayes displayed a graphic noting that these “astute” analysts of modern American politics write for such publications as The Washington Post, Slate, and New York magazine.

Those scholars argue, Hayes says, that “the political dysfunction that has brought about the shutdown and now threatens default, isn’t so much gridlock. It is exposing the fatal flaw in our Constitution and highly distinct system of government.”

“In other words, it’s the Constitution’s fault,” the MSNBC host declared, “and something truly catastrophic was bound to happen sooner or later.”

We all knew this day would come, didn’t we? America’s luck was simply too good to last. Hayes strongly suggests that it’s time, having outlived its usefulness, to scrap the old parchment and adopt a parliamentary system.

What insight! Of course, this crisis is like no other… in at least the last few weeks.

The election of 1800, which necessitated an amendment to the Constitution be hastily passed and sent to the states in order to prevent the potential dissolution of the Union, was merely a harbinger of the 21st Century rise of the tea party.

The Nullification Crisis and the Civil War, too, were but speed bumps on the road towards the crisis of 2013. The selection of Rutherford B. Hayes as president and the collapse of Reconstruction also merely foreshadowed the presidency of Barack Obama.

And, of course, the brutal and destructive battles among legislators and citizens alike which characterized the fights in the 1950s and 1960s over civil rights and desegregation could only be correctly understood as a subplot in the epic story of the nation’s 44th president and the Republicans who oppose him.

“What we have now is record polarization and one party, the GOP, that is likely most extreme, ideologically coherent, and demographically self-contained party probably ever in American history,” Hayes insisted, inexplicably forgetting the history of 19th Century America.

“They believe, despite losing the presidential election, being a minority in the Senate and receiving less votes in the House they have full democratic legitimacy,” he added. How dare the Republicans, after winning the House of Representatives – the Constitutions’ most responsive body – believe themselves to have retained some political legitimacy.

Certainly, one of nearly 20 government shutdowns in the last 40 years will be looked back on by historians, if such a profession still exists in the smoldering Hellscape that remains after this present crisis has run its course, as the beginning of the end of the most successful and prosperous democratic republic in the history of the globe.

We joke, but Hayes invited this mockery by not tempering his dire prognosis with even a hint of perspective.

Hayes and his cast of constitutional scholars will not be surprised to learn that they are not living at the dawn of the end of history and the American experiment will continue long after President Obama has vacated the Oval Office. They are aware that their pronouncements are hyperbolic, but the audience demands red meat. This is, after all, the entertainment business. And insisting that there has never been a crisis like this one does put the viewer on the edge of his or her seat.

It is hard to accept that Chris Hayes, a scholarly and well-read host, truly believes any of the bluster above. He just doesn’t mind misleading his audience into thinking he does.