Chris Hayes on Deceptive Bill Clinton Edit: ‘We Shouldn’t Have Done That’
video

Chris Hayes on Deceptive Bill Clinton Edit: ‘We Shouldn’t Have Done That’ 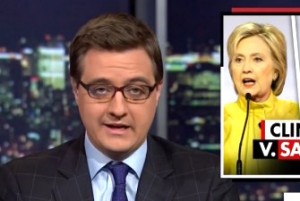 As Mediaite reported over the weekend, MSNBC’s All In with Chris Hayes ran a clip of former President Bill Clinton on Friday that was deceptively edited to make it seem as though Clinton was unfavorably comparing President Barack Obama with Hillary Clinton. After a weekend of heated Twitter activity over the story, host Chris Hayes addressed the issue on Monday night’s All In, issuing something in between an apology and a bunch of excuses.

In his original report, Hayes said that if embracing President Obama is part of Hillary’s “winning strategy,” then Bill Clinton had gone “off message”by saying that the system is “rigged because you don’t have a president who is a change maker.”

“A number of people pointed out that Clinton’s full remarks changed the context of that point, and he went onto defend President Obama,” Hayes said Monday night, then played the fuller clip that we published Friday night. Then, he offered a semi-apology:

“We did not characterize Clinton as trashing the president or slamming them, as others did. We said he went off-message, which is arguably true. Here’s the important thing. In cutting off that clip, we didn’t allow you the chance to make that judgment for yourself in the full light of context. We shouldn’t have done that.”

There’s just one problem with that, which is that All In’s production team didn’t simply omit a huge block of context that changed the meaning of what Bill Clinton said, they cut him off in mid-sentence. Here’s how Chris Hayes reported the remark Friday night:

Hayes: If that’s Clinton’s winning strategy, she might want to make sure her husband is in the loop. Bill seemed to go a bit off-message last night in Tennessee while campaigning for his wife.

Clinton: She’s always making something good happen. She’s the best change maker I’ve ever known. A lot of people say, you don’t understand. It’s different now. It’s rigged. Yeah, it’s rigged because you don’t have a president who is a change maker.

So while he didn’t use the word “slam,” it is clear that the viewer is being told that President Clinton must be saying that Barack Obama is not a change-maker. Hayes is right, that is arguably off-message, but only if the rest of bill Clinton’s sentence that you cut him off in the middle of doesn’t change that:

She’s always making something good happen. She’s the best change maker I’ve ever known. A lot of people say, you don’t understand. It’s different now. It’s rigged. Yeah, it’s rigged because you don’t have a president who is a change maker with a Congress who will work with him. But the president has done a better job than he has gotten credit for. And don’t you forget it!

(Applause so huge Bill has to wait for it to die down, then continue talking because it won’t)

Is there one soul in this crowd that believes that?

It’s to Chris Hayes’ credit that he addressed the issue at all, but it’s also doubtful that you will ever see anyone pitch a show called Arguably True with Chris Hayes, yet it seems like someone on his staff sold that pitch to Chris Hayes tonight. It would be a mistake for him an/or MSNBC to slough this off as a case of just not giving pain in the ass viewers enough extra context. It is Journalism 101 that you don’t cut someone off in mid-sentence, unless the rest of that sentence is “and on a completely unrelated note…”