Chris Hayes On Gingrich: Hard To Think Of Anyone More Widely Reviled And Polarizing 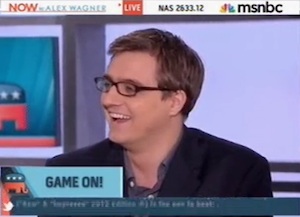 In a discussion about how divisive American politics has gotten on Now with Alex Wagner, MSNBC host Chris Hayes took a shot at Republican frontrunner Newt Gingrich, saying he could not think of a political figure more disagreeable than the former Speaker of the House. “It’s hard to think of a more widely reviled and polarizing figure of the political era than Newt Gingrich,” Hayes exclaimed. “The fact that Newt Gingrich has so much baggage, you could do a wire style series of seven seasons in which each one has its own distinctive narrative arc of sort of back room deals!”

Earlier in the segment, Lynn Forester de Rothschild remarked that with such divisive tensions on both sides of the political spectrum there was a real opportunity for a third-party candidate to jump in the race. “There could be an entirely new dynamic that takes place in this election, which is that you have two very polarized candidates, and you can make the argument that both Romney and Gingrich have a problem with the public and that actually this is an opportunity for a third party candidate to emerge. There is this organization called Americans Elect that will have a line on every ballot 50 states.

“Or Ron Paul could run as a third party candidate,” the National Review‘s Robert Costa interjected.

“You have to run as a Democrat and a Republican,” de Rothschild pointed out. “So there’s no Democrat who’s going to run with Ron Paul.”

“There’s still got to be a spoiler.” Costa observed. Who’s going to be that spoiler? It only could be Ron Paul at this point,”

Some of the panelists began suggesting potential third-party candidates like Michael Bloomberg which made Hayes roll his eyes.

Watch Hayes’s epic putdown of Gingrich below via MSNBC: