Chris Hayes Panel: Cain Campaign Thought Scandal Was ‘A Good Way To Run Against The Press’ 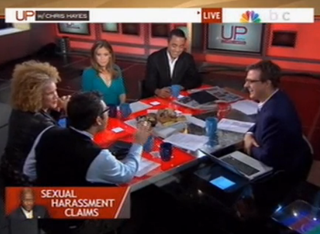 With the news that the Herman Cain campaign had been given ten days notice that Politico was going to run a story on their candidate’s history with sexual harassment suits, the campaign’s bizarre, disorganized response has left many confused as to their competence. On this morning’s Up with Chris Hayes, the panel attempted to sort out what the game plan was for Team Cain, and went from attributing the response to either “stunning stupidity” or a conscious effort to “run against the press.”

With Chris Hayes opening up the floor with the latest denial from Cain chief of staff Mark Block, the panel began by discussing how believable the denials were. Elise Jordan of National Review noted that much hinged upon whether this was “an isolated incident where it really was a woman taking advantage or a series of repeat events,” as sexual harassment “is not something that a man does just once.” While the media waits to find out, however, Jordan argued it was a “godsend for Rick Perry. What struck fellow panelist John McWhorter about the denial, however, was that it was the sort of statement that could be easily refuted once evidence came out. “He can’t deny it and then not have it come out later,” he noted, giving Anthony Weiner as the most recent example of politicians making this mistake. “The stunning stupidity,” he marveled, “this lack of context, as if [Herman Cain] was invented as some sort of robot yesterday, where he doesn’t understand American social context.”

Not all the panel agreed that the response was stupid, however. Sam Seder noted that among the right, attacking the press for a story they knew about far in advance may not be a doomed strategy. “I think they said, ‘This is going to be a good way for us to run against the press,'” he argued, noting, “no one in the conservative movement has gone broke by having enemies in the press.” “To a certain extent,” he concluded, “it was… ‘we can get mileage out of looking like we were blindsided.'”

But not all of the panelists seemed to take the campaign seriously, or want to assess it as anything other than a “reality show,” as Michaela Angela Davis called it. “Herman Cain is the new NeNe [Leakes],” she joked (a reference that left Hayes confused). “Whose drama is at the top of the charts” is the way the primary functioned to Davis, and now, it was Cain’s “minstrel show in reverse” that was garnering attention.