Chris Hayes Panel On Obama Speech: ‘Like A Daily Kos Diary From 2003’ Or Just ‘Whiny’?
video

Chris Hayes Panel On Obama Speech: ‘Like A Daily Kos Diary From 2003’ Or Just ‘Whiny’? 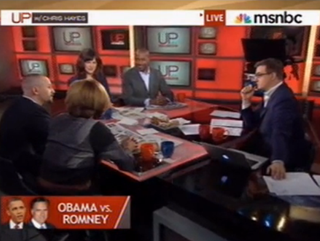 During a talk this week, President Obama made the argument that the media was doing a disservice in some ways to Americans by making the claim that “if two parties are disagreeing, then they’re equally at fault.” It was a false equivalency argument that rang familiar to Chris Hayes this morning, who compared the comments to what the liberal blogosphere was saying about conservatives for a good decade, and was “fascinated” by the comments. Not everyone on his panel agreed that this was a high point in the President’s rhetoric, however, as they discussed the long history of Presidents being far too worked up by things written in the media.

“There’s an impulse to say that if the two parties are disagreeing, then they’re equally at fault and the truth lies somewhere in the middle, and an equivalence is presented, which reinfornces people’s cynicism about Washington in general,” the President noted, in words that Hayes “respectfully” qualified as sounding “like a Daily Kos diary circa 2003… that is something that people have been hip to in the grassroots for a while.” The equivalency was not entirely unjustified in the past though, argued Van Jones, noting that much of the McCain campaign “showed some respect to the idea that we were tired of George Bush polarization,” though that wing of the Republican party, in his eyes, was subdued.

Forbes‘ Josh Barro disagreed with the wisdom that the rest of the panel found in the President’s words. “I just found it kind of whiny,” he admitted, suggesting “the President has never had any idea how to deal with this Congress” and whenever he can’t get his way, “he just complains.” Hayes did not disagree about complaining, but didn’t find this trait particularly unique to President Obama. “When you read presidential diaries… they spend all their time complaining about the press,” he argued, sometimes on very obscure negative things written in the press. The press was not particularly sympathetic to the President in this speech, either– Hayes also noted AP fact-checked him and argued President Obama had moved to the left on the individual mandate, which prompted Van Jones and Hayes to ask indignantly, “since when is supporting an individual mandate a left-wing idea?”