Chris Hayes: Putin’s Op-Ed ‘What It Feels Like to Other Country’s Citizens to Be Lectured at By US’ 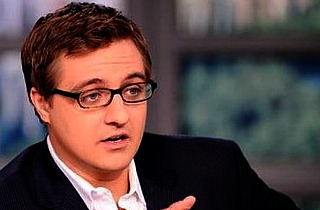 Of course. In the wake of an insulting and offensive op-ed published in the New York Times by Russia’s dictatorial President Vladimir Putin, sharply criticizing President Barack Obama and America’s self-impression, MSNBC has endeavored to show Russia how you really insult Americans. The first impression expressed by MSNBC’s Alex Wagner, and her guests, about the offensive op-ed was a celebration of the continued reach and impact of the New York Times. This astute observation was followed up by prime time host Chris Hayes who insisted that America had it coming.

Hayes took to Twitter on Thursday to express his condescending thoughts about the nature of discourse in America and around the world relating to the debate which preceded Obama’s aborted push for a punitive strike in Syria.

After patronizing the whole of Twitter and, presumably, praising himself by extension, Hayes went on to insist that Putin had doled out to America a dose of its own medicine.

Conceding that Putin’s op-ed was needlessly provocative (and could possibly endanger the so-called Russian solution to the Syrian crisis, which was only ever an effort by Moscow to diminish the standing of the American president in the Middle East), Hayes insisted that the Russian president showed Americans “what it’s like to be lectured to by US.”

And this is what it feels like to be lectured to by Chris Hayes. It’s not pleasant, but only because he is lecturing to us from an aloof posture which suggests he believes himself to be above it all. Much in the same way that a diminished Moscow presumes to lecture to the United States about the legitimacy of its foreign policy, Hayes critique is so unpalatable because it comes from an unearned position of presumed moral authority.