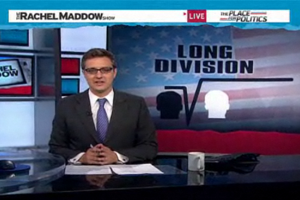 After a week of high-intensity media coverage, it’s difficult to find a new angle on the Shirley Sherrod scandal. Tonight, The Rachel Maddow Show directed the media where to look around the fallout, and, more importantly, where to stop searching. The Nation editor Chris Hayes, filling in for Rachel Maddow, refused to name the man who sparked the scandal– Andrew Breitbart— and called for him to be an “exile” in the political media world.

Hayes was beginning a segment on black farmers– those who Hayes argued were being ignored the most throughout the scandal– and describing what he perceived as the “bizarro world” nature of the way Breitbart had been treated, going directly from the center of a Shirley Sherrod firestorm to a posh Beverly Hills Republican fundraiser. In “normal” world, Hayes expected Breitbart’s “race-baiting website [to lose] all credibility as a legitimate source.” In his “bizarro world,” the Sherrod story was something to raise the site’s profile on:

“Today, Talking Points Memo revealed an invitation to a big RNC event happening next month in Beverly Hills. And whom do Republicans want to be associated with? Who instead of getting run out of town on a rail is the first name featured on the invitation? The very same guy behind the entire sorry trumped up hoax, whose name I’ll happily refrain from mentioning. By now, after his fake ACORN scandal and after his fake Shirley-Sherrod-is-a-racist-and-so -is-everybody-at-the-NAACP scandal, no one should say that guy’s name. He should be an exile and there should be a rule in every politicians Outlook to forward every email with his name on it to “junk.” Instead, h’es a draw. He’s good for Republican fundraising. In bizarro world.”

Hayes is doing more than many in the media by keeping his eye on the ball and targeting Breitbart specifically, instead of getting lost in the quagmire of blame that spans the spectrum from Fox News to the Obama administration. The one indisputable fact in this entire story is the fact that its existence is based exclusively in the fact that a video of Sherrod was posted on Big Government. But calling for the “exile” of the kind of polarizing figure that is beloved as much as he is hated, especially when tangled up in the greater political web of Journolist intrigue and the conservative narrative of liberal censorship, is a risky card to play.