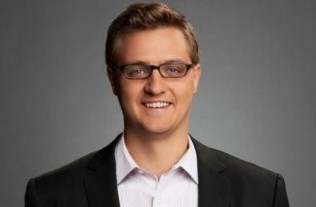 Yesterday, Ed Schultz announced that his MSNBC show is moving from the weekday 8 p.m. slot to the weekend — leaving an opening in the network’s primetime lineup. Naturally, this led to much speculation about who would replace him. On Thursday, MSNBC announced Chris Hayes as Schultz’s replacement.

RELATED: Ed Schultz Announces He Is Leaving 8 P.M. Slot On MSNBC, Moving To Weekends In April

The move makes Hayes, 34, the youngest primetime host on cable news. He’ll be up against Fox News’ Bill O’Reilly and CNN’s Anderson Cooper.

Hayes currently hosts an MSNBC weekend show, Up with Chris Hayes. “I am thrilled to be joining Rachel and Lawrence in primetime,” Hayes said in a press release. “I’ve absolutely loved hosting Up on the weekends and I’m looking forward to thinking through the news five nights a week.”

In his report, The New York Times‘ Brian Stelter noted some of the reasoning behind the move:

The change is predicated on the belief that MSNBC can win a wider audience with Mr. Hayes than it did with Mr. Schultz, a champion of the working class whose bluster didn’t always pair well with Ms. Maddow and the channel’s other prime time program, “The Last Word with Lawrence O’Donnell.” Mr. Hayes, on the other hand, is just as wonky as Ms. Maddow and Mr. O’Donnell, and is a regular contributor to both of their programs.

On Saturdays and Sundays, Schultz’s show will air from 5-7 p.m. — and he noted “a number of personal and professional reasons” for taking the new time slot. During his time as a primetime anchor on the network, Schultz said he was able to be a “voice for the voiceless.”

“Chris has done an amazing job creating a franchise on weekend morning,” said Griffin. “He’s an extraordinary talent and has made a strong connection with our audience. This is an exciting time for MSNBC.”

“I am thrilled to be joining Rachel and Lawrence in primetime,” said Hayes. “I’ve absolutely loved hosting UP on the weekends and I’m looking forward to thinking through the news five nights a week.”

More information regarding the new 8 p.m. program will be available in the coming days.