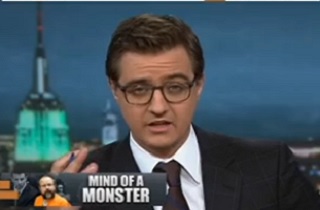 Cleveland kidnapper-rapist-murderer Ariel Castro has been taking a renewed round of well-deserved scorn on the occasion of his sentencing for the crimes he committed against Amanda Berry, Gina Dejesus, and Michelle Knight, and Thursday night’s All In with Chris Hayes was no exception. Host Chris Hayes and his guests Goldie Taylor and Cindy Southworth excoriated Castro for his nauseating comments at the hearing, but Hayes did admit to “one moment when there was a tiny, slight pin prick of empathy in me.”

Castro’s statement at his sentencing was a retch-inducing delusion that included claims of consensual sex with his captives, and pleas for understanding of his “addiction,” but there was one moment that affected Hayes, who is known to be honest about his feelings even when they might be super-unpopular or easy to demagogue.

“I want to play the one moment when there was a tiny, slight pin prick of empathy in me” Hayes said, “as I watched this awful statement, was him talking about himself, saying that he had been a victim of sexual abuse, himself.”

“I’ve stated before that I was a victim of sex acts when I was a child,” Castro says in the clip. “This led me into — these people are trying to paint me as a monster and I’m not a monster. I’m sick.”

“It seemed like, in a weird way, the most honest thing that he said,” Hayes continued, “but also this weird kind of distancing approach to medicalize, so that he did not have to take moral responsibility, Goldie, and yet there was some part of me that, when I considered, I flashed before my brain, a child being abused, that there was this opening up of empathy.””

He added that “maybe there’s this bizarre hope that there’s actually some possibility of redemption in the long life that he’s going to spend behind bars.”

Goldie Taylor noted the high percentage of offenders who report such abuse, and said “I’m certain Ariel Castro was being very honest when he said he was a victim of sexual abuse as a child. That does not absolve him of the criminality of this.”

The National Network to End Domestic Violence‘s Cindy Southworth pointed out that “When you think of one in three girls, one in six boys will be a victim of child sexual abuse before they’re 18, one in three women, or one in six men, are not perpetrating crimes against people every day. So the majority of victims are resilient and strong and fabulous and live wonderful lives and don’t hurt anyone. So he made intentional choices to do these horrific acts, and while I feel bad for the small child he was, there’s no excuse.”

“I agree,” Hayes said, concluding “that was why it was amazing to see Michele Knight stand in that courtroom and deliver that statement, and to think about the unbelievable resilience of the human spirit, and what it is able to live through and conquer and redeem.”

There will doubtless be some who take this minuscule nod to Ariel Castro’s humanity as an opportunity to beat up on a guy they already don’t like, but I think Hayes’ impulse to speak that twinge of empathy aloud is part of what separates us from a monster like Ariel Castro, the ability to humanize even him. It’s an impulse that I’ve had to fight on other occasions, but not this one.

First of all, I don’t agree that Ariel Castro was being honest about the abuse he says he suffered as a child. Aside from the fact that such a claim is Castro’s only refuge, however slight, from complete monsterdom, his bizarre description of that alleged abuse as “sex acts” rings false.

That’s somewhat moot, though, because as Southworth pointed out, most victims of abuse do not go on to hurt others, and so the mere invocation of such abuse in this setting is a slur on all of them, including those Ariel Castro tortured. The idea that a history of abuse could mitigate Castro’s acts even a little bit is completely wrong.

I have known many survivors of violence, sexual assault, and torture at the hands of parents and authority figures, and not a single one of them was the slightest bit confused about whether what was done to them was wrong. It is sick enough to inflict such horror on someone else, but to do so when you know how it feels makes it so much worse. Ariel Castro, abused or not, is just a really bad guy, and a worse guy if he already knew what it felt like. His life promises no redemption, other than the vain hope that empathy afflicts him some day, and he begins to relive his crimes as his victims experienced them.