Chris Hayes Says Conservatives Are ‘Getting High On Their Own Supply’ 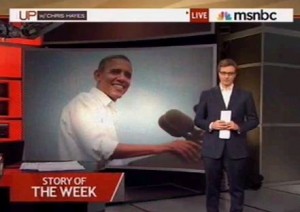 The much-talked-about and ever-hardening conservative media bubble has been mixed with another apt metaphor, courtesy of Chris Hayes. On Saturday morning’s Up with Chris Hayes, the eponymous host likened the recent conservative poll denial trend to a famous bit of street wisdom, quoting The Notorious B.I.G.‘s fourth crack commandment, which says “Never get high on your own supply.”

When you mix the furious poll-smoking with that metaphorical bubble, what you get is the current conservative clambake.

If you believe the polls, things are looking rather bad for Republican presidential candidate Mitt Romney, who trails President Barack Obama by six points in the Gallup daily tracking poll, and by about 10 points in recent polls of battleground states like Ohio. Faced with this news, the choices are to fix whatever is wrong with Romney, or, to paraphrase another rap legend, don’t believe the polls.

I’ll only quibble momentarily with Hayes’ attribution of the rule, which was offered in song a full ten years earlier by N.W.A. in the much better song Dopeman (that’s probably a generational thing), but the comparison is apt. The problem isn’t so much with the poor, deluded throngs who are, as Hayes reports, sending unskewedpolls.com’s hit count into Pete Rose territory, it’s with the contact high that has distorted reality for the Romney campaign spin machine.

In a characteristic bit of partisan generosity, Hayes offered some empathy for the plight of dispirited conservatives, noting that “I can recall, with somewhat pathetic acuity, spending hours on the internet in the waning days of the 2004 election why the lack of cell phones led to underreporting of John Kerry’s strength. We all, as humans, are subject to confirmation bias.”

That’s true, and while you could argue that the 2000 election gave liberals a well-earned sense of paranoia, refusing to believe in polls (imperfect as they may be) is an obstacle to improving them.

That’s where the big difference lies, however. All of the liberals (myself included) who blamed crummy polling methods, and blamed the media for complying with the narrative on John Kerry, and blamed long lines in Ohio for Kerry’s loss would have been better served nominating a better candidate, or making our candidate better, but that really wasn’t our job. This time around, the crack is being smoked by the people at the top, the people in charge of the campaign, and even by the candidate himself.

In fact, Romney’s taking hits from some kind of super-duper-strong crack pipe, or maybe it’s some of Walter White‘s Blue Ice, because while most poll skeptics’ mythology is at least based in some kind of logic, appealing but flawed, Romney simply thinks that the very idea of polling is invalid, because poll questions are actually Jedi mind tricks. He refuses to believe that maybe he actually isn’t the ‘droid voters are looking for.

This poll mania is just a symptom of Team Romney’s contact high, as evidenced by the narrative they’re spoon-feeding to Politico these days. It appears they have accepted that Mitt Romney is six different kinds of horrible candidate, as evidenced by the polls they say they don’t believe, and are trying to make that a selling point. Don’t penalize Mitt for giving a terrible job interview, the logic goes, because he’s still the best man for the job (even though they also don’t want you to look at his resumé). It’s an interesting argument for some conservative pundit to make on Real Time, but as the message that Romney’s own campaign is trying to put out, it is addled and desperate.